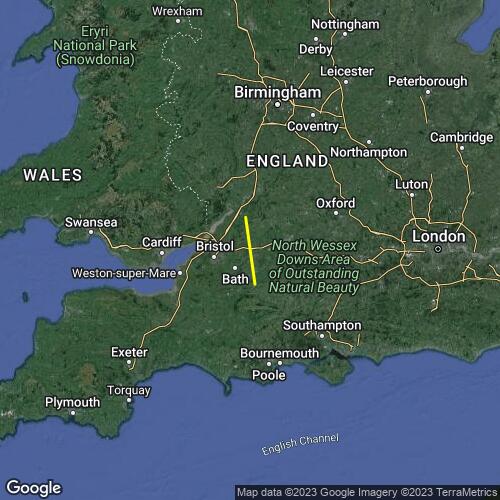 What a difference a few days make! After the epic flight a few days earlier i had a few days off as my shoulders were battered from Sunday's flight and I didn't have much hope for the airmass, but a few locals proved us wrong so we we decided to have another go. The forecast was NW but we had a northerly as did many other local sites. After a brief chat we decided to set goal at westbury, 50k with a train station to get home and hopefully a track towards better air.

We launched under 7/8 cloud cover with little hope of xc but the air was clearly working, a few bubbles came through to give us hope and as I climbed with graham and joe dart I still wasn't convinced and glided back to the hill, only to look back to grey and joe sticking with it and disappearing! I flew back to Iain Smallwood who was in a climb and we both decided to go with it, as the climb petered out at a couple of grand behind the hill I had my eye on mike byfield who seemed to have a nice climb out from rake off a few k upwind, Iain headed off downwind to attempt to get under the others climb, I took the safe option and pushed upwind to mike, coming in a few hundred feet below him and boom, nothing! Downwind Iain had the climb but no chance I could get to him so I shadowed the valley to nailsworth, picked a playing field at the back of town and headed to land. All of my cussing must have worked as I hit a rough little climb, put it on a wingtip and climbed out, soon to be joined by mike we escaped.

The N wind had now switched NW, climbs seemed weak and all the while drifting off course, graham, joe and Iain had all pushed south 10k and were doing well by now, we on the other hand were struggling, climbs were weak, broken and drifting off track, getting frustrated I pushed on. A few minutes later I was starting to think about landing options when I spotted a seagull a few hundred metres away climbing. Lucky! I followed him straight into a 2/3ms core and breathed a sigh of relief. 4 or 5 turns later, nothing. Quite abit of searching and I found a weaker core to work, this soon died out and if I went again. Low again regretting not sticking with the last climb I was soon looking at where to land when what should I see, a pair of gulls close by screaming up, again the same thing happened, strong core for a few hundred feet them nothing. Now at about 35k having blagged the last 20k following gulls I was low again drifting away from goal in a bitty climb, luckily a few hundred meters downwind another pair of gulls, this time in a screamer that quickly got me to 3000ft and I decided to push to a decent cloud that again was working with a nice 3ms climb with some gulls giving a easy final glide to westbury. I knew Joe and Graham had beat me there as the whole time i grovelled along I could see them cruising down a street in orbit!

Upon landing Ken W came over and as we watched mike come into land he offered us a lift back to the car, top man.

Turned out to be a difficult day for me, I was quite glad chatting to mike as he reported similar difficult climbs. Also I think the goal being off track to the wind direction didn't help, I was pushing crosswind, low in desperation of getting to the better sky the others were in, I would have been better off taking what climbs I had high before pushing which might made for less stress in the long run but hey ho, next time maybe.