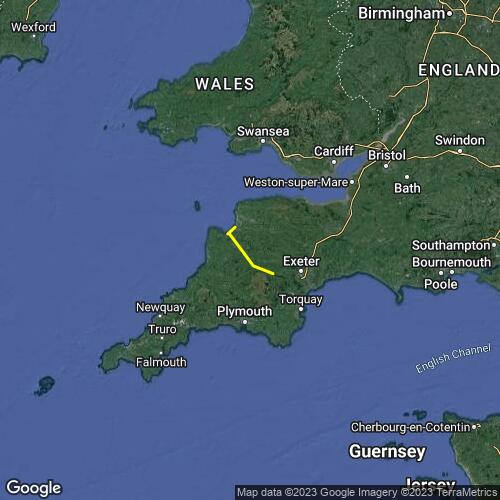 First uk flight of the season. Decided against the long flog up from devon to the cotswold for big distance, and opted instead for a stroll down to local take off. Beautiful coast run, followed by a bit of a punt on a weak climb to get away from the coast. Strong wind meant that there was rapidly a point of no return, so commitment required. Scratched around fairly low in scrappy broken rough thermals for ages, just clinging on. Rich came with me and we alternated being lowest for ages. Eventually established properly after getting low near Merton. Wind kept getting stronger and stronger, and we had a radio debate about the wisdom of tackling the high ground of dartmoor immediately down wind. Opted to cross wind twice to streets that took us away from the high ground. Decided to land as wind continued to strengthen. First attempt failed as hoofed back up by a climb! Pondered on continuing as a lovely street led on to dawlish, but a lot of the territory to cross would have been very tricky, with deep windy valleys, so sense and cowardice won the day and pushed back forward(just) to land at whiddon down. Once again a retrieve from annie.