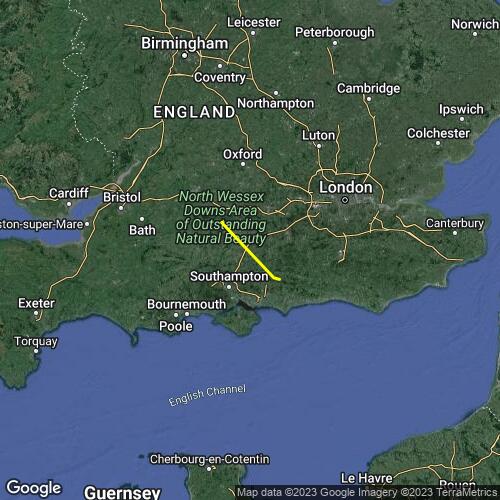 Planning this flight meant unbooking other plans for what looked like a thermic and unstable day. Very cold northerly air and lots of sun was always going to work, just depended on the direction, strength and how rough it was going to be. I could quite make my mind up on Combe or Liddy as it was expected to go more westerly and combe isnt great. I stuck with Come Gibbet as it takes more pilots and was forecast to be lighter.

I arrived at 9.30 and by 10am pilots were launching and getting high. After prepping the kit and radio I was in the air by 10.30am feeling the conditions. Its always good getting off early. It was quite nice at that time but you could feel the edges of thermals were sharp. I flew do to the classic tree end and got a climb right off the end and took that to 2,500ft over the back. With most pilots flying back and unable to get more height i chose to do the same, gaggle flying is much better. I bagged the TV waypoint over the back then landed. I thought id also lost my wallet so spiralled off to land and check, only to find it in my pocket.

A quick toilet brake then back in the air. Noticeably by 11.15am it had picked up and gone more west and quickly landed. Waited with Greg Hamilton at the west end for another thermal and pinnged off into it. I followed that the went back to the tree lined area and got a decent solid thermal. It was a horrible climb out and really rough but held it and very actively flying.

I met some others and we were 3000ft over the turbine working this scrappy thermal and i decided to push down that ridge a bit towards a cloud that was forming. It worked and much nicer. I could see a perfect cloud street pretty much to the coast so it was a good position to be in.

A few more climbs i was passing Highclear castle and heading to A34. I met back up with the gaggle, Greg, Garry, XT and Craig on his Zeno. We were soon up at 4200ft and touching the clouds. Didnt get much of a chance to enjoy them as it was full on.

Next climb at the A34 and seeing Whitchurch in the distance. We worked another rough climb but didnt hang around. Loosing sight of some in cloud i too the edge and pushed on to Popham. On half bar i was soon there and picked off a very smooth climb with some birds and lots of saleplanes and GA aircraft from popham. I saw the others fly my way. We worked this for 10 minutes with lots of enjoyment being shouted to each other.

Flying over popham and m3 i decided to push on to brown candover where i saw a new cloud building. Back down to 1500ft it was nice to be right for once and get another sweet climb but lost sight of ther others. I saw Craig working something but low down. I took this then repeated the same process the next 10km.

Heading towards the south downs is always a sight and seeing petersfield over the escarpment was great and i knew i had that into the bag. Great views of the coast from there. I pushed on to Peterafield and saw a big cloud. I got there and it was very rough with i think some mixing air. I just couldnt work it and be confident of not getting a collapse so pushed on past Buster West SSC site and then south Harting to east. Saw some gliders on Harting but i was now low and looking for the best field to land for a 63km flight.

Found a nice grassy strip next to the road with no powerlines or livesstock and put down there. On landing i saw Craig low but flying over Harting and lost sight.

So i really enjoyed that and working with the gaggle but didnt like some of the thermals. Not issues with the glider and no collapses so all good: -)