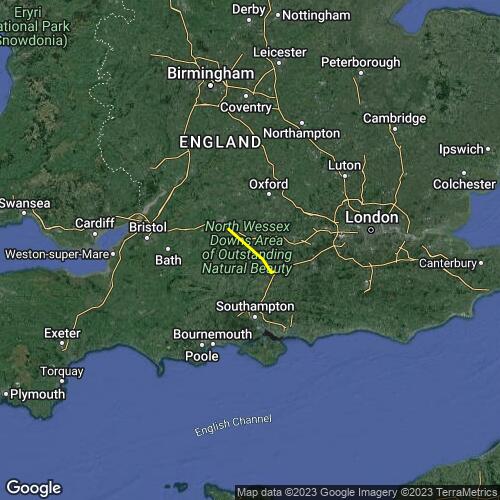 It wasn't much of a tour for me, but it was good to see Mark Rubinstein and a pair of Impeys on the hill after an early start from Sussex.

I'd chosen Liddington thinking it might be less crowded than Combe Gibbet, as well as a better wind direction. When I puttered up on my little motorcycle I was a bit daunted at the throng of wings already laid out, but it turned out to one of the least stressful cross-countries that I've ever done.

Michael "Helium Pants" Long was soon up high on his Explorer, and almost everyone who took off after the first few minutes quickly gained altitude. Me too - a few S-turns, and then I was circling with a green Advance. Our thermal merged blended with another, and four of us were on our way. I feared that it might be a bit early and a bit low to be going over the back, but the climb remained steady.

Pete Impey was in the mini-gaggle, and we stayed in touch for most of the flight. It was lovely to cruise over Aldbourne in lively but pleasant air; only one thermal was particularly small and punchy, but not violently so.

As we approached the Kennet valley we spread out a bit, but then Pete came back from a western diversion to join me over Hungerford. We eked out weak climbs taking us east of the Gibbet, but finally he was too far above me to follow, and I did my own thing as he pressed on. I'd noticed a Mentor 4 fighting for a low save - Alasdair Jones, it turned out - and I turned back to join him. We climbed together for a while, but after a brief glide he found a much better climb than mine. An Alpina then joined me for a while, but he also outflew me!

I was by now freezing cold and also didn't want to fly over Popham airfield in case I got low there, so I decided to cross-wind as close to Basingstoke as I could get for an easy journey back. But a squawk from my Oudie warned me that I was entering Odiham MATZ - not prohibited, but I was a bit spooked and turned back west. That put me in the middle of nowhere, and just short of 50k. As I wandered over my chosen landing field trying to persuade the figure on the Oudie to click up from 49.98, I startled a small herd of deer, and touched down still short of the half-century.

Google Maps told me that, although I was very close to the railway, I was 2.8 miles from Overton station, and 39 minutes from the only train for two hours. So I looked up taxi firms, and found one with 4.3 stars and another with 2.4 - what on earth does that one do to its passengers? I phoned the good outfit, and their driver efficiently found me at my remote crossroads. The cafe at Basingstoke station provided a surprisingly good coffee and sandwich, the connection at Reading was quick, and Andy Price kindly rang to offer me a lift from Swindon station back to Liddington after his own XC to Hungerford.

A lovely start to the cross-country season. And perhaps my Syride is more generous than the Oudie, because the XC League says it was 50k after all.