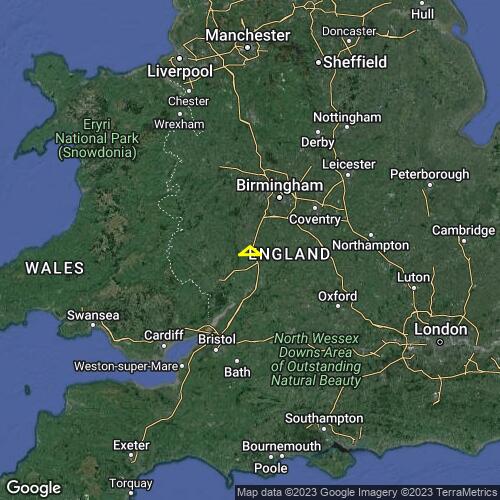 'All change! ' was the theme for today. Plan one was to go winching, but decided I preferred the Malverns. Arrived at the Beacon with Ben F and Fabio. Conditions were very light westerlies. Pilots were split between triangles over the back or out in front. Myself and several others opted for out front - Bromyard to Much Marcle.

It was a day to be patient. The first few brave souls had no luck, with two landing out front, but when the big one came through everyone got into it. Well, kind of. Others seemed to get hoovered straight to base whilst myself and several others struggled to gain any real height. This was probably a blessing as the early birds hit the course hard, many falling short of the first turn-point. Tim C, Fabio and I decided we'd bumble along under the big clouds out front and dismiss the planned task. Once we cleared Gt Malvern boom, six up to base. A glide then boom again, this time just short of Powick. For some reason I thought we were over the corner of Worchester - Duh. Crossed the M5 then it happened again. I'm missing out the bits about stodging around in light lift.

It was just after the next glide that the others left me. They went to base and I couldn't get a climb for love nor cursing (more a kind of shout of encouragement with profanities). With the others now long gone I headed for home. Getting low (ish) just before my return to Malvern, I managed to find a two up and popped up high enough for a top landing.

Fabio had also made it, so an easy retrieve. What a fab day. Who needs plans: -)