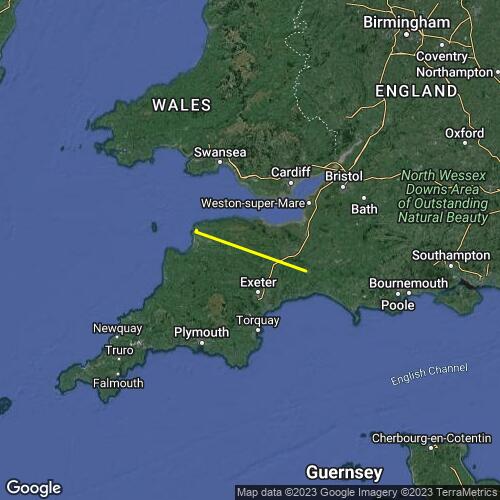 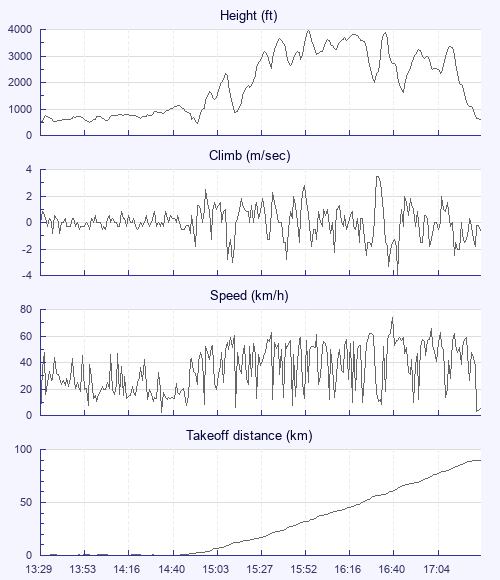 Getting away from the coast is always special, and always difficult. This was no exception. We had been struggling to get higher than 800 ft amsl all day. A few brave souls had struggled away earlier in a gaggle and weak climb, never really more than 800 or 900 ft above the terrain, and decked it when their thermal ran out in the hinterland between coast and proper inland. I landed for a lunch break and watched as Andy Brown left the hill in a slightly better climb and better base(all of 1500ft! ), then went back up without much optimism. The air improved and climbs were more frequent- but cloud base had dropped on the hill front and immediately behind to 1150 ft. All day we had watched a better and higher line of clouds forming tantalizingly out of reach forming in a line from Croyde to Georgeham and stretching out towards Barnstaple. From the lofty cloudbase of 1150 ft there was just an outside chance we could go on a death glide and hope to reach it, so Sidmouth Steve and i decided to go for it, ( at this point, my usual partner in crime Richard Osbourne was kindly giving a new pilot a tandem ride, so was unable to follow) Predictably the glide was sinky, and when we reached the promising golden fields with all of 200 ft agl there was only the merest sniff of lift. A few circles and Steve found nothing but more sink. I looked back at Georgham village, and reckoned i could clear it and reach an upward sloping landable field beyond which might just work. I practically weaved in and out of the chimney pots to reach the field with perhaps less than 50 ft, but it blessed me with some scrappy lift. Time to focus hard and it paid off, slowly, roughly, intermittently turning into a sweet climb to cloudbase at the lofty heights of 1700 ft amsl- perhaps as much as 1200 ft above the territory. From here it was obvious that this line of clouds we had seen was actually a seabreeze front coming in from sea air flooding up the Barnstaple estuary to the south. I followed it briefly, but could see that it was a bit of a street to nowhere, ending perhaps 20 km downwind. To have any chance of a longer flight i knew i had to hang a slight left to get to better cu's forming inland. Again it was obviously going to be touch and go from that height, and sure enough i got pretty low aiming for a pair of golden fields on the upwind edge of the valley leading to Bratton Fleming- i had climbed here in the past and it was one of those places where warm air really has to release as it won't roll down into the valley. That was the theory, and to my relief it worked, taking me up to a reasonable base of 3000 ft and relatively conventional xc flying. From that vantage point i could see the sea breeze front to the south of me hanging down a good 1000 ft lower than me, with a similar one from the north Devon coast near Ilfracome and lynton encroaching from the north, reinforcing my theory that one of the things that makes getting away from wooly possible is a convergence effect from it position sandwiched between the north coast and Barnstaple estuary. As usual base rose progressively as i flew inland. The clouds looked terrific, but curiously most gave pretty weak and watery lift. More often i was climbing in the blue. Andy brown who was 2 hrs ahead of me had a similar experience. Apart from this and the awesome views to north coast, west coast and south coast the rest of the flight was fairly conventional apart from watching the sky between me and take off get bluer and bluer as the sea breeze swept in from every direction except in front of me. I scraped past Dunkerswell just to the north and could see my nemesis approaching-now the sky ahead was turning blue with sea breeze approaching from that direction too! There were a few scattered cu's to the north, but they were out of reach, so the inevitable landing followed. To make a good day even better i was greeted by a friendly and curious farmer who gave me a lift on his quad bike a few km to the main road, where i was kindly picked up by my son Sam and whisked off for celebratory fish n chips n beer. Not bad for just a day at the coast!