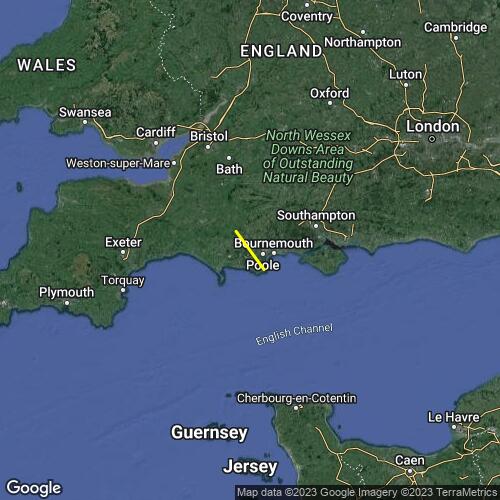 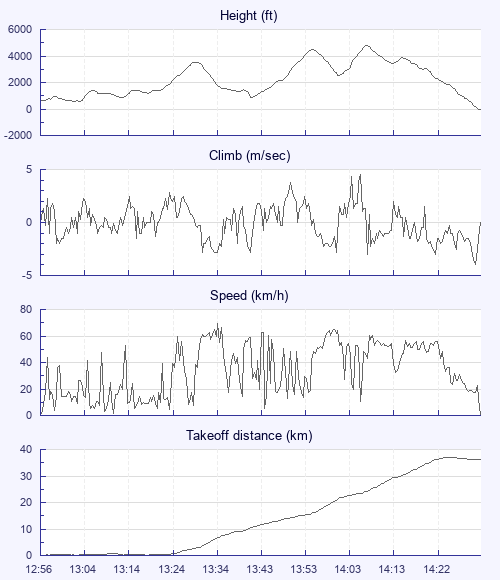 I hadn't flown Bell Hill since my first visit there in 2008, when Dave Massie and I of the Southern BCC team got to Swanage. It's a lovely site, but I was a bit scared of going back there and spoiling my average. Still, Dorset seemed to have the best conditions for Saturday, so I turned up at 9.30 to see several wings already flying nicely.

Andy Ward of the Wessex club was organising the small and informal BCC round. Sam Tolton and I were a bit embarrassed to be the two-man Southern team, until we found that at least one other was similarly short of bodies. He and Sean Staines, the local XC guru, gave us a thorough briefing - the two vital points being don't fly into Bournemouth airport and don't land in the sea (the sea breeze at Swanage is likely to have a strong westerly component joining with the day's north-westerly to push us off the east-facing beach)

It was breezy and the really good cumulus clouds had yet to arrive, so I waited a while to get ready. By 1230 the clouds were superb and a couple of early birds had gone over the back, including Sean himself and Richard Barber. But it was now uncomfortably hot on the hill, and a bit busy, with some confusingly broken climbs. I decided not to go with a small gaggle who headed over the back lowish, although I think one came back. A rigid hang glider out front showed be some good lift, which turned into a proper thermal.

By the time we reached the top of it, there were about half a dozen of us. A blue Advance set off on glide, and I followed a bit to one side. When I looked around for the rest, they'd all vanished! Still, I thought, there was a good chance that Advance boy or I would find something.

We glided a long way and got down to under a thousand feet before I saw him fly through some scraps, which I decided to stop for, sweating again at this low altitude. I then saw a red kite off to my left start to thermal. It stayed a couple of turns with me then buggered off, but it had done its job. Up I went again, with Chris Jones, Pete Chalmers and others joining me, while the Advance stayed up in something of its own.

After a difficult first half, the second was easy, with plenty of strongish climbs as we neared the coast. I kept an eye on my ground speed, remembering Sean's warnings - it reached 60 kph at one point, but then eased off a bit. I made my declared goal just before Swanage, then cruised over the town, extending the flight towards Ballard Down; my thinking was that if I dropped into a strong westerly, I could land on the down where it sticks out eastwards into the sea. My speed got very slow as I headed north-east, suggesting that the sea breeze was not that strong - but then when I turned west again it got slower still! I thought I might have to land in a field of cows, but had just enough glide to make an empty mown one. Behind me several other wings approached the town.

I'd forgotten to switch my radio on before launching, which meant I hadn't heard Richard urging us all to land in the same field as him. I turned it on and made contact; taxis seemed in short supply, so I anticipated fish and chips on the sea front, but Richard eventually managed to book a minibus. Seven of us boarded it, with another one joining at Corfe Castle.

Do try Bell Hill if you get the chance. It's big and smooth-shaped with clear air in front, and, being owned by the Wessex club, it's an open site. XC flights are limited to the 40k to Swanage, but it's a delightful flight to make.