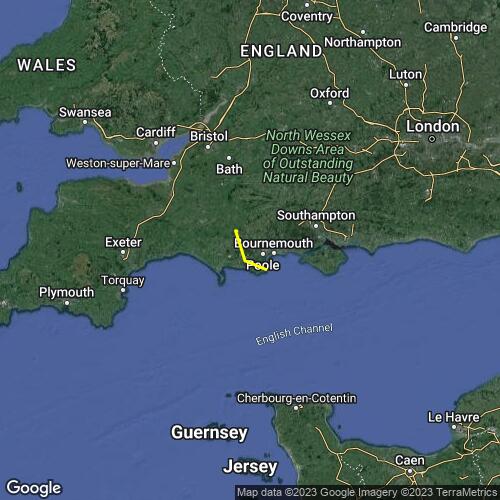 What a beautiful day!

I got to the hill at 1030 to see a bunch of glider's already high over the hill and cumulus starting to pop upwind with cirrus only about 10 miles east and general clag beyond that.

I was at the right place and Bell holds a special place in my heart as it was where I did my first flight post qualification in the UK (26k to Wareham on an original ozone mojo in 2004!

I got myself ready and as I did was amazed to see Chris Jones and someone else head off xc when there were no clouds and it was still only just 11am. I also couldn't understand why given there was an air display at Swanage starting at midday and airspace was shut till 1330.

So, once in the air I tried to work my way upwind, but didn't really make much progress against the 25 - 30 kmh wind indicated on my Vario. After a while I got to near base and seeing nothing interesting downwind headed in a South Westerly direction as that'd extend the distance and give me clouds to aim at.

The first half of the flight was text book cloud, climb, glide cloud. Then as I approached Bovington there was a cracking cloud ahead, but it meant pushing close to airspace and low over the gliding club. Fortunately no one was launching, so over I went towards a sailplane that appeared to be climbing in an elevator…

Sure enough I hit the climb as I came in under it and took that 3 - 5m climb back to base. However it was still only a little after 1pm, so I loitered for a while at base before heading on towards Swanage. I have often heard Corfe can deck you, so when I found a pathetic climb, stuck with it, having switched my Vario screen to final glide. Slowly the ratio required dropped as I was pushed along by the wind and very slowly gained altitude.

Once my required ratio hit 8:1 I found the core whizzing me back up towards base. I chose to land in an empty sports field and then tried in vain to get the pilots following to join me. Exasperated, I packed up and Andrew Craig piped up on the radio… As I was already packed, rang almost every taxi company in Swanage and those that answered, laughed at the idea of us getting a big taxi back to the hill.

Just as I was giving up hope and thinking there's no way I will. Make a friend's 40th back in London, my phone rang and an 8 seater taxi agreed to take us right away. 10 minutes later, the telegram retrieve system had done it's magic and we had 8 very happy pilots on their way back.

A traffic free journey back to town meant I'm only 24 minutes late and even had time. To write this in the cab on my way…

If the rest of the keeps going as well as it has till now, as the black eyed peas said, tonight's going to be a good night!