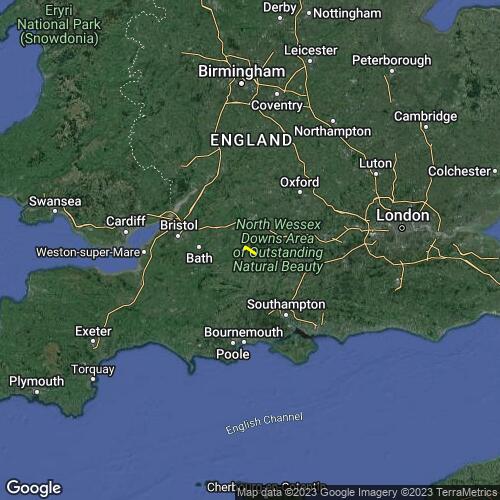 Cycle or fly? RASP was average to good. I decided to do both: 43km with my Cycling Pewsey friends in the morning, and then try to fly something similar in the afternoon.

Frazer was also making a late start, so I cadged a lift to the hill. We heard that a gaggle had already climbed out from Golden Ball with triangular plans, but no one was in the air there when we passed it.

As we walked across the Milk bowl, crows were soaring and thermalling. The wind sometimes felt off to the south, sometimes coming straight up. We agreed that the bowl could be nasty in those conditions. As we neared the spur, a lone Advance climbed out. Those who'd missed his boat told us he'd launched into nothing.

A frustrating couple of hours followed, with the wind sometimes dying and sometimes gusting from almost every direction. We saw Jim Mallinson return from his triangle, and Xiaoting cruising about at base. Meanwhile we tried the south face and the western shoulder - or rather, Frazer did, while I stood ready to pimp. The air felt fickle; even when it was strong enough to kite for a while, it never felt as if it wanted to lift me into the air. At one point Frazer tried a forward launch and ran almost to the bottom of the hill with the air stubbornly refusing to accept him into it.

Finally, having no vehicle at the hill, I thought it was time to take a punt, expecting to land by the track out front and walk to the road to hitch home. I saw a swift a long way out, and launched. By pure good luck I found a climb much nearer, and followed it round the spur and into the bowl (Steven Shaw had done the same a little earlier, but not managed to keep going up)

I got to about 1500 feet, and lost it. But Mike Long had walked back to the bowl, and was soaring; he found a thermal and climbed up to join me. As he headed off to Rybury, I took a proper climb up to 3,200. This time the drift was westerly, not southerly, and I flew over Golden Ball, where Xiaoting came in under me to complete her big triangle.

I had a lesser ambition - to fly the few kilometres cross-wind to Pewsey. The glide was sinky at times, but as I neared home a swift marked a climb, and we circled together - the first time that I've actually thermalled with one of these superb fliers as opposed to using the lift that they find, although of course it did about three circles for each of mine.

When I've thought about flying home to Pewsey, I've thought about landing in the Broomcroft Road playground, or on the Pewsey Vale football field, but in real life both looked a bit too hemmed in by obstacles, so I flew over my house and headed for the fields beyond the Cooper's Arms. I was home five minutes after packing up.