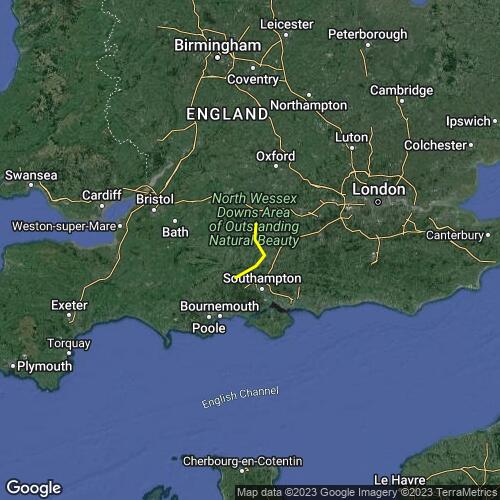 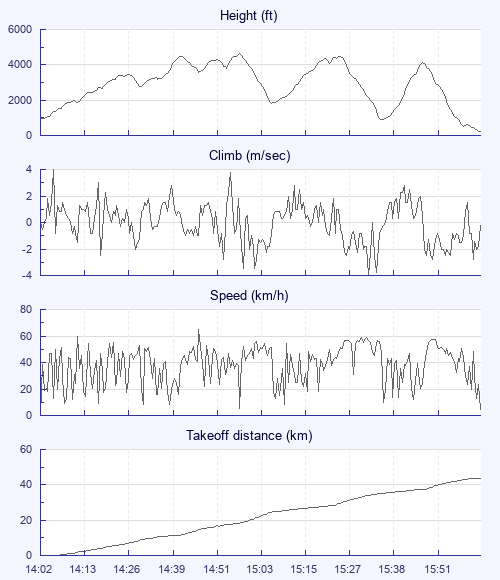 After a June with no cross-country flights at all, I was hopeful of a nice Combe Gibbet day, while trying not to put pressure on myself. During the morning the strong breeze was a little off to the east, and I enjoyed the wild flowers and a cup of tea more than my brief time in the air - although Bryan Regan and Jim Mallinson had no trouble in climbing out, each on his own. But by lunchtime the wind was bang on the hill, and of a sensible strength.

Malcolm Beard on his Nevada and another started climbing. Chris Hille (Delta) and Ollie Stewart (Iota) followed, as did Nik Valiris, Helen Barnes and another (Henry Saunders? On a blue and purple Advance). I was a bit late into the climb, but it nevertheless felt promising. I took it over the back despite being lower than Nik and Henry, while Helen headed back to the hill and got high again.

As my thermal fizzled, I decided to chase Nik and Henry, but found a better climb halfway there, so that they soon came back to join me. Soon we were together, which was nice, three being about the best number in a thermal - enough evidence of where the best lift is, without too much crowding. Helen followed us a fair bit lower, having picked a not ideal time to commit to going over the back.

On a flight from Combe in a northerly, the question always arises: head east to Sussex? Or West to Dorset? Or keep going straight downwind until you have to land after 40k just before Romsey, because of Southampton airport? I knew Jim's plan had been Sussex. With a big blue hole straight downwind, the clouds seemed nearer towards the south-east, so that's the way I went. By this time I'd met up over Andover with Chris Hille and Ollie Stewart, but they went the other way. Helen had almost caught up, but then she and Nik had headed even further east and got low. A shame, as a nice long cross-country with them both would have been a treat.

My glide got steadily worse; it seemed that I'd chosen wrong, as I found myself uncomfortably close to the airspace. The next climb confirmed that there was still plenty of east in the wind, and fortunately my drift was between Southampton and the Boscome Down zone. It's very useful in an area of tricky airspace having flown there before. I considered heading for Romsey to get the train, but wasn't sure if I could fly right to the town (I once landed at Timsbury, a couple of miles out). But with the climb persisting, I crossed the Test valley and carried on, as a helicopter flew along the river below me.

I saw another paraglider ahead of me and higher - perhaps Chris or Ollie. Down to 700 feet (maybe 500 above the round), I dared to cross a large wood and got a climb starting from the middle of it that took me back up to a good height. As the Oudie ticked past 50k, I thought of landing at a decent-sized village (Whiteparish, I think) which was sure to have a bus stop, but there was still a chance of more progres. Gliding past a gravel works got me nothing, and a second attempt at an arboreal low save didn't work.

I came down beside a big isolated house with a nice garden and a car on the drive. Promising - but no sign of life until, as I packed up, another car drew up and I saw signs of movement. A youth came out to ask me if I was alright, thinking I'd come down on a parachute. I asked him where I might find the nearest bus stop or station; he confirmed that I was in the middle of nowhere (I wasn't sure whether I was in Hampshire or Dorset; in fact I was in Wiltshire). He didn't take the hint, so I set off walking and trying to hitch, rebuking myself for not landing at the big village.

But it worked out, as it usually does. I reached the village of Redlynch, and got a lift to Downton with a nice man who'd had a few sailplane flights. I successfully rushed for the Salisbury bus, and as I walked through the city centre to the station considered two plans: train via Reading to Hungerford and taxi, which wouldn't get me home until about 9.30, or via Westbury to Pewsey, which would get me home much earlier but mean I'd have to cycle to the Gibbet the next day to get my van.

I asked for a ticket to Pewsey, and was about to touch my card to the machine when a hand landed on my shoulder. It was Chris and Ollie, who'd landed not far from me and hatched the much better plan of catching a train one stop to Andover and getting a taxi from there. So I changed my order, got back to the Gibbet in time to see some windy evening soaring, and was home for the second half of the football.