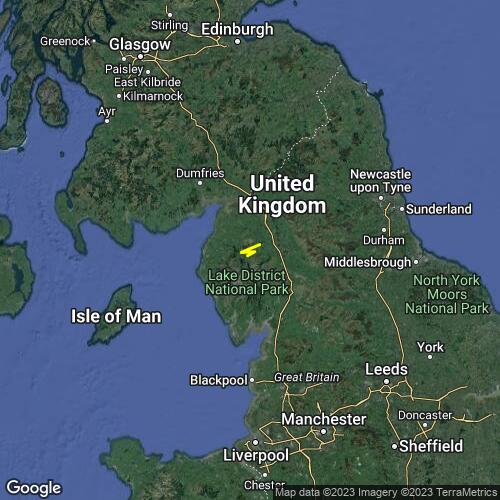 Comp Day 1 of the 2019 Lakes Charity Classic and the site choice is Blease Fell, it's a lovely site but a fair walk up so we all set off early. Parking is tight so the plan was lift share, park cars at the football ground and shuttle drivers back up.

Our task setters, Richard Bungay and Mike Cav did a great job, a decent elapsed time cat's cradle, fairly demanding in the conditions but achievable if you gave it some thought. Start of speed was a 2.5k cylinder centred on Scales, on to a smaller cylinder on Scales, push out front towards Walla Crag, back to Scales, back past take off across Jenkin to a cylinder not far from Dodd, a final trip to Scales and then out into the flats to End of Speed and goal near the M6. Just over 46k if we achieved it.

Well, the first mistake was to try and race down the ridge to Scales without taking advantage of the thermal over take off, several of us turned there and were then nearly pinned as the wind was coming down the valley making it very tricky to push back to take off. I did manage it on 3/4 bar but it was a close thing and several pushed out too far and went down. I found the take off thermal and pushed out, tagged the Walla cylinder and then climbed onto the spine behind take off and headed for Scales again (see, I do learn)! A much easier trip back this time, at height but being very aware of not getting low behind the very sharp spines that run out into the valley in front.

Back to the take off thermal, climbing high enough to take me across to Jenkin and beyond, tricky but doable with the help of a few others. I had a very helpful Advance wing just in front, so followed his route, tagged Dodd and headed back east to take off again. Several of us crossed the windy gap between Jenkin and Blease, some just squeaking across low, then we all climbed up and set off to Scales (again! )

I tagged the cylinder, had fairly good height and so headed off into the flats, it was a bit shady with a few sunny patches but there was a reasonable cloud street and a wing some distance ahead of me, so there will be something to work. Wrong! Big mistake! All I found were tiny bits of thermal, too small to work and acres of sink.

Oh, well, 10k from goal wasn't a bad effort and as I packed up a couple of others came to join me, sad for them but it made me feel a bit better. Apparently the trick with the route after the last trip to Scales was to go back to Blease again, top up there and then cut the corner at height to leave the hills and head for goal. Not long after we packed up the sky changed completely, the shade disappeared and apparently there was loads of lift everywhere and you could just glide to goal!

Hey ho, lessons in the bank for another day. Thanks to Pete H and Yannick for the company and Lester for the ace retrieve. Here's to next year, I will be back: -)