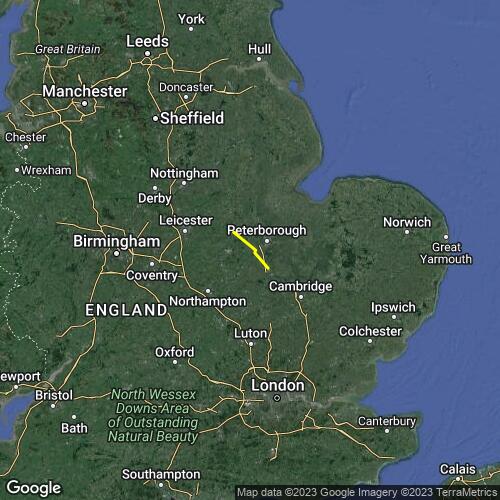 Conditions looked great for East Anglia with RASP and the wind showing that Rutland was ideally placed for the day. Frustrating therefore not to be able to exploit it to the full. (Still no point not putting in goal at Clacton 150km away - got to think big! ) Sam Oxley was the first to climb out - despite only having been flying since naafi-break and putting us all to shame - but decided not to go XC. The rest of us managed to launch consistently off cycle and repeatedly fail to connect. Eventually I pushed forward into the breeze and caught something coming off the camp, drifting back in the wind and having to make an early commitment. It took me over the adjacent field where it came together into a good climb that went all the way to base at 4600ft, albeit having to switch cores a couple of times. It was the last time I would get that high! There seemed to be sink everywhere and, after pushing south to get around Sibson I finally found a climb. It took me nerve-wrackingly close to the DZ limit. I could see the plane on circuits and the occasional parachutist though they were far off in the distance. But it meant having to track side-ways which is never fun. The same thing happened again as I had to push south to get round Conington. Having cleared both of these I could now go on a clean heading for some distance. Assuming I could find a climb! But the sink seemed to be everywhere and when I did find lift it was very weak, dribbling me towards Alconbury but without any real core. By now high cirrus had caught me up and was pushing overhead and though I could see a beautiful sky about half an hour ahead I couldn't catch it and was soon on the ground. A big thank you to Sam Oxley who zoomed down the A1 to retrieve me, and to Mick R and DT for operating the field.