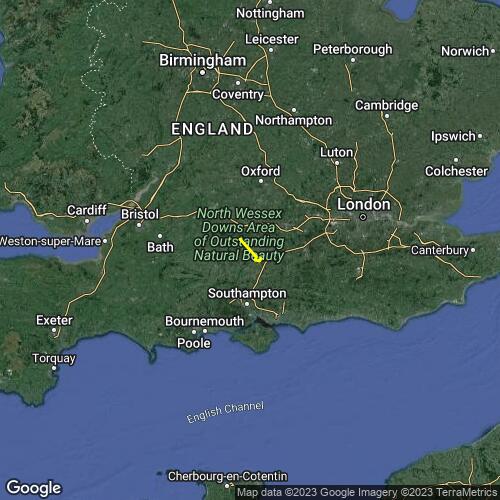 A day of mixed fortunes. It started with lots of scrappy little flights, side landing with several opportunities to practice kiting up (less exhausting than walking in the heat! ). Finally a climb out with about 6 others, up to cloud base and away over the back.

It was sooo slow, virtually no drift and we all became impatient and dashed off one by one. As often happens there seemed to be way more sink than lift, but once found, the lift was quite strong and rough at times.

I made it to Whitchurch without too much trouble and found a nice climb to take me back up from 1700' to over 3000'. I then stupidly became distracted by other wings climbing ahead of me, decided I could catch them, left my climb and just headed off into the blue. I didn't catch them of course, you rarely do, so ended up on the deck early and with a great sky above me.

More lessons learned - fly your own flight and don't become hung up on what others are doing and, more importantly, stick with the lift you have, especially early in the day.

The one real bonus of the day was to come. I got back to the hill to find that Phil had left and didn't hear from him for a while, until he rang to say he had just landed near Arundel, 93k and a PB for him so he is definitely back in the game now.