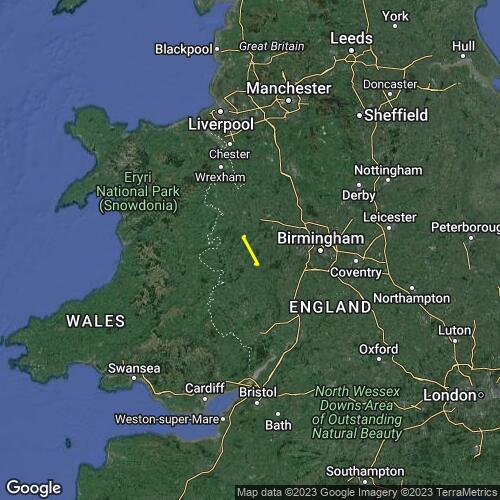 A lesson in humility today. Or the X-Shrops depending how you look at it.

Was as well prepared as I've ever been - up super early and trained it from London arriving at Lawley around 0930. Chilled for a bit in the warm lee side thermals then got ready for 1100 as Tom Murfin (good to see another Rutland pilot) and Dave (? ) arrived - amazing no one else was there. Goal was set for Petersfield. Ha ha ha!

I was off first and soon into a nice climb out front. I risked it and went with it at 1800ft. Too low! One climbing crow was not enough to save me and I was on the deck 23 mins later. By a fluke local pilot Ben Howson (? ) had seen me and drove me back to the hill and I was up in the air again soon after noon - record retrieve and a big thank you! He told me about the sink hole all the way to Wenlock Edge (best to arrive 1000ft above that to be in with a chance! ). It's a learning experience…

Quick turnaround and a much better climb, followed by a boomer to base - taking fewer chances - and I was off. Climbs were massive but so was the sink and the holes between climbs were huge. I arrived low at Clee hill and failed to repeat the performance last time I was there of finding a sneaking climb out front and barrelling over it. I lost my nerve in the climb and turned back and ended up soaring the front for 20 mins until a thermic lull force me to push out in the (vain) hope of finding the climb. Should have side landed! Took an hour to slog back up. Drenched! Another wing went over (Richard Carter I think) and took a climb off to the left that seemed to kick off a small ridge behind the hill. Now I formulate a new plan to take off and dive for that route. It's a costly mistake! A couple of kites give the cue to relaunch and in hindsight I should have stayed with them. Instead I make a mad dash for the small ridge, which delivers a dose of snotty sink and I arrive at my target with barely enough to crank a turn and land. Total flight time of about three minutes; and there's no way I'm going to climb back up Clee from here (amazing how far a PG can travel in such a short space of time). Another climb - sadly on foot - up the little ridge and I ready for my fourth take-off. If I'm lucky I'll be able to soar along this little 'dune' round the edge and slip back into the Vale of Evesham (at 1300ft and with the vale at 800ft it's not impossible I may find a climb) and/or find a station. What happens next is not for display, but suffice to say it would make some of Jean Baptiste Chandelier's stunts look tame. Best to call it quits. I pack up and head for the station. Again a kind gent in his front garden comes to my rescue with a lift.

What a day to mess up - travelling back on the train the clouds were still gorgeous at 7pm and base must have been at 6k+ on what looked like one of those perfect May cold-air-advection days. And yet what an adventure.