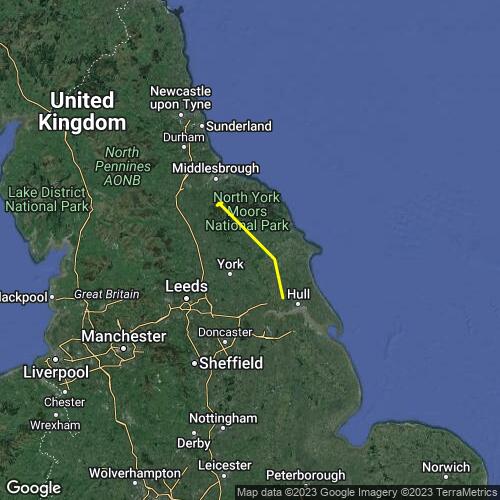 The best laid plans started going awry in the morning when we turned up at Jake's and he's packing to go down to Wales for the better flying. It had looked on for a big flight from Barton Fell, Ullswater, aiming for York the night before, but it was probably too windy for the Lakes and the Dales. As it happened, it turned out we were wrong as people flew at both. Chris and I decided to head for Model Ridge and picked up David on the way. After a fine pie from the Lordstones Cafe we checked the wind and kitted up straight away.

We launched before midday and were able to start getting a little height on Cringle but nothing that was building. The air was on the lumpy side and thermals disorganised. About 15 minutes in, we were treated to a awesome display of three F15 Eagles in succession coming in from the east and passing directly overhead at a high bank. Separation was maybe about two or three hundred metres. After that it was head down and concentrate on spending any height we gained finding something out front that would build into a climb. The clouds looked great but everything was just breaking up too quickly after 600m alt. Chris suggested moving over to Carlton and this was a little better. First, Gary got away on his own, then Chris and I a climb or so behind. And that was it for the day, no one else got away and it wasn't for lack of trying on David's part. Mad how a class sky, good wind and big hill don't conspire to make it easy to get away.

This is not to say Chris and I had an easy time of it. I was starting to get a bit queasy as we topped out at the low base of 1200m. Lumpy, asymmetric and wandering is the way I'd describe this one. Still, musn't grumble, Chris and I were on our way. We stayed high, working well connecting close clouds past the Bilsdale transmitter towards Kirkbymoorside. It's true that the lower the cloudbase, the more frequent the climbs are. Given equal heating and a wetter air mass then the volume has to go up somehow and it tends to be shorter and more frequent climbs. Just once did we need to head to an into wind ridge to top up.

It's important to exit the North Yorks Moors high because there's the inevitable descent into the Vale of Pickering. Here's the problem, as we went south the clouds were on our left, but the further left (and east) you go the quicker you will be in sea breeze which means the quicker your flight is over. There is never not sea breeze to worry about when flying from Carlton. Gary had taken a route that was more inland than us but it had also put him on the deck before Helmsley. Swings and Roundabouts. Chris and I tried several light clouds heading into the blue hole to the south to no effect and we dived back under the heavier cloud very low.

Low save time. The pressure is on and we dribble towards Pickering under cloud that has to be working somewhere. We swap roles of finding bouyancy, and bubbles with Flamingo Land also in view. We edged toward the sunny south side of the bank of cloud way above and things developed from there. BTW don't go to Flamingo Land expecting Flamingos. It seems to be static caravans, rides and parking. This was our way across the Vale and we arrived at Malton about mid height. Chris found it easy to connect but I was having a brain fart and wasn't feeling like I could climb back up ready to start across the Wolds. He radioed down a few times trying to help me establish and I said I'd keep at it. Chris went on south to connect with the next clouds and I decided to fly the ground features and thankfully the top of the Wolds have lots of bowls where hot air would be forced to release.

The work paid off, and I found a light climb that built into a three up to base. Several ground features could have been supplying into this climb and it is a way of explaining how some climbs seem very weak low down and then become guaranteed screamers higher up. Things were not so good for Chris. He'd got to the next clouds and found nothing so he'd doubled back but too low to give himself time to find anything nearer me. He landed near Sledmere and I radioed back to David on Carlton to make sure we all knew where we were. I was now on my own and exploring new ground having never gotten this far from Carlton.

At this point taking the climb I did had put me within spitting distance of the sea breeze front. Again, apologies for no photo, I'll get it sorted one day. This was a dramatic ~1000 foot step down in cloudbase a couple of km to the east and what it tends to do is raise air in front of it. I'd got a little low, but from Wetwang onward I was able to connect with the landward rising side of the front and just fly south for about 10km maintaining and rising all the way. The sea breeze followed a stepped line to the Humber which was well visible by this point, so if I could just ride it all the way…

My education about sea breeze fronts continues though: -) They do, of course, march inland at varying rates in different places. I passed a corner and went onto the next flank south staying 500m in front of it on half bar. I didn't look behind until it had drawn alongside me, but the section I'd just passed had extended inland of me. Sneaky git. My ground speed on half bar was not stunning since air is being drawn up and into the front. So there's a lesson here. Prioritise staying inland of a front over your intended destination. They can be a good friend if you play them right but they can also entrain you and spit you out the back at the speeds paragliders amble along at. I'll draw a diagram if anyone feels they need to see the dynamics.

I spent a brief period in the white room, and then spied a gap to the ground and followed that out and down. Of course, like a surfer having a wave break and wash over, I'm now in the air equivalent of the foamy white stuff. Sea air is not something that's easy to work and it is definitely full of bumps and bangs but not too bad, a passenger single engined turbo prop passed by me heading north, too near cloud for VFR so they were definitely having a nosey at this piece of flotsam hanging around at 4000 feet.

Although there's a clear view of Berevley and then Hull it's now going to be a difficult task to get there. I have the wind partly behind me but although there are clouds in the sea air they're a long way off and I know there won't be organised lift on the way. I enjoy the view of Beverley, smiling at the coincidence that I'll be in there(ish) twice in a week having only been once in my life. Next week we're setting off from our house to Spun Head over three days on the bikes and we'll stay there overnight.

As I go lower the wind turns more from the east, as you'd expect and I let it take me over the village of Walkington. I try for another low save but it's windy air and not will to fully start rising yet. I drop down into a field a couple of km out of town. Chris and David are soon along to collect me from The Barrel and they pass on the chips and fish I offer from the van. Since I'd considerately landed near the motorway we're all home for early evening.

Definitely a flight I'll remember and take away a lot from. BUT I could have done better. Not getting that climb nailed down over Malton and becoming separated was a missed opportunity. As was not altering my course more to the SW to stay on the landward side of the front which was working beautifully for a time. Sea breeze fronts can move at speeds of over 30 kph!