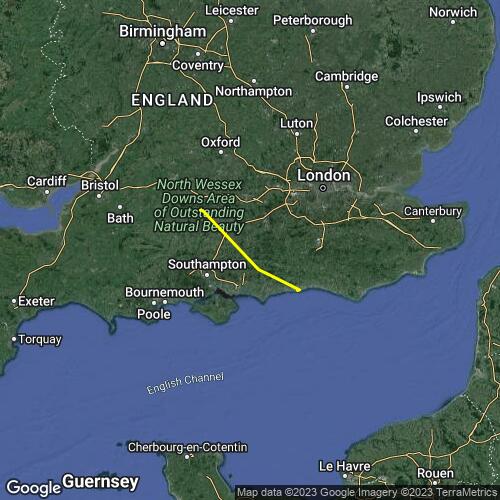 As Jim Mallinson and I drove to a hill last week (he flew 153 km, I flew 8), we discussed mountaineering literature. We agreed that we both preferred the "then we did this, then we did that" type over the genre that analyses the ethics, metaphysics and aesthetics of the ascent. This account of my flight on Tuesday will be written accordingly.

RASP for all of southern England was bright red, with a medium-strength north-north-westerly forecast. I hoped, therefore, for a better day than the recent BCC Sunday, which was spoiled for most of us by overcast, overcrowding and lack of wind. Although I knew it would still be busy at Combe Gibbet, folk were also heading to Leckhampton, Liddington, Uffington, Selsey, Devil's Dyke and hills in the Midlands.

As I drove up the hill, wings were already high, but it soon eased off. Cycles came through and Kirsty climbed out early with RJ; Steve Newcombe soon followed from the other end of the ridge. I feared another difficult day, but after sitting out one busy thermal, another quickly found three of us climbing slowly but steadily; me, Chris Lennon on his Ion 3 Light, and someone on a red Gin Explorer - I still don't know who it was.

At not much over 2000 feet it seemed to be fizzling out. That's low to go over the back of Combe, so I pointed north-eastwards and shouted to the others: "Shall we head for that cloud? " Gin boy immediately set off, so I followed, and soon we were climbing again, this time to a respectable 4,000 feet.

We worked well together, showing each other where the best bit of the turn was, spreading out on the glides, and finding a new climb when we needed one. At one point I was tempted by a nice cloud towards Andover, but it was definitely not a northerly day, and trying to head into Dorset would have been a no-hoper, so I accompanied the other two towards Whitchurch. We passed comfortably high over the busy airfield at Popham.

I rarely bother to set a goal, but today I had - a point picked off my Oudie screen because it was about 50k downwind, out of airspace and near a blob denoting a town, which turned out to be Petersfield. Twelve kilometres from it the Oudie squawked "On final glide". But the Required Glide box showed 12 to 1. The Phantom is good, but that seemed a bit silly, so I carried on taking the climbs.

I had to scrabble for a bit after the M3, while Chris and the Gin found it much easier, but I found a nice thermal that brought us together again. Nice, except - something happened; my left wing dropped back, I put my hands up, the glider dived a bit to the right, and I more or less caught it. Jeezuz, I though - have I just spun a bloody Phantom? I hadn't had my inside hand lower than usual, and I there'd been no sudden gust. Then I remembered an incident when I was flying with Steve Purdie in India on my Pro-Design Accura; I thought I'd stalled it and radioed Steve, who calmly replied: "It was a collapse. " I reassured myself accordingly.

Goal just before Petersfield was now getting close. Fortunately I hardly had to deviate from the natural downwind line - I would have turned off it if necessary, which might have ended the flight. I enjoyed my Oudie's congratulatory message, then flew on over the town, where I joined the Gin in his lowish save - the only time I got below 2,000 feet.

Now the South Downs were within reach. I've never flown the Skysurfers sites, so this was my first visit. On what I guessed must be Harting two wings were doing some desultory kiting, but no one was in the air. Gliding over the site produced nothing, but between the Downs and the sea it got easier and easier. Earlier in the flight I'd noted the lack of clouds ahead, and assumed that the sea air would eventually deck us, with or without a kicking. But the climbs got stronger and more plentiful - convergence, I assume, although without clouds (I'd seen only one patch of curtain cloud, way to the east, and it hadn't lasted long)

I lost sight of the Gin about here, but Chris and I enjoyed the conditions - at one point we climbed strongly about 150 metres apart, not feeling the need to investigate whether an even better core was between us. I'd dipped into the 4,500 feet airspace, but was so close to the edge that I didn't worry about taking a climb to 4,250. Back in the 6,500 I resolved not to go above five-and-a-half, as I'd be making my way east into that zone.

Having crossed the Downs I wasn't tempted to go back inland and head for the Dyke, fun though it might have been to arrive there. The coast looked inviting - first Littlehampton, and then as the lift continued, Worthing. I was by now cold, tired and hungry, but was just about motivated enough to consider whether I could make 100k, while being sure not to land in the sea, or crash on someone's rooftop. I headed for the beach, noting every park and playing field on the way, and checking carefully for white horses out to sea. As the 100 appeared on my screen, a flag showed a sea breeze with a westerly component down below. I turned towards a big grassy semicircle just behind the beach. My speed dropped to single figures, then to single figures with bar, and I decided that Plan B must be to land on the beach itself, going backwards if necessary. But I made it comfortably on to the grass, and touched down in smooth sea air.

I chatted with a couple of kite surfers, and then met Seymore, a paramotorist who'd been up earlier in the day with his engine switched off. He kindly took my landing photograph. Then it was a march to Durrington-on-Sea station, and a train to London. Kirsty joined me at Worthing station, and Chris turned up on the same train. They'd been planning to travel more cheaply via Reading, but were persuaded to aim for an earlier Hungerford train by going via Victoria and Paddington. A long wait for a Circle Line tube meant that we didn't make it. We then had an even longer wait for a taxi, as the cabbies of Hungerford were not on their most diligent form. But sunset is a lovely time to arrive back at the Gibbet after a good flight. Whoops - keep clear of the aesthetics!