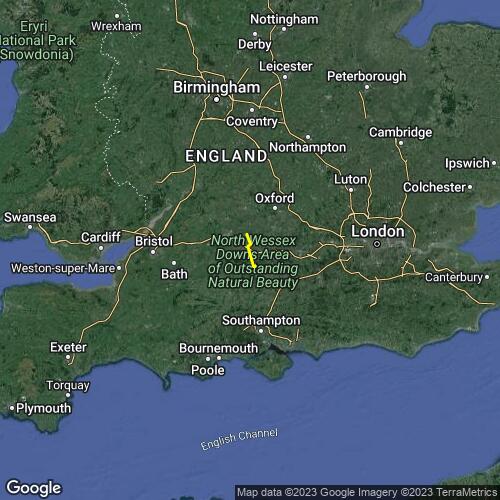 It was a surprisingly tricky day to get up. Despite quite strong wind gusts neither us or the modellers could get much height. Four pilots from the Isle of Wight had turned up hoping to make the coast. I managed to find a climb over the trees. John Rudge followed (he flew 100km+) and found a better climb. However we were soon returning back to the hill; maybe John was hanging around for his mates… I flew out across the road and then to the main car park only to find sink all the way back to take off. The end of 40 min boat about. From then on wards not a lot seemed to be working. Eventually I decided to take the next thermal after a lull happy to call it a day if I landed in the bottom field.

As luck would have it I found a good climb and managed to gain some decent height leaving a struggling Zeno landing back on the hill. On a glide to Lambourn I began to think that was where I'd be landing. I knew of a ridge that faced into wind so decided to fly to it hoping something would trigger from there. Hooray! Got a nice climb to 4300'amsl. On my way to Hungerford. At least it was looking like I'd make the Common there. At 2800' a small but dark cloud produced a stonking climb to 4700'. Didn't need any more height so abandoned the thermal as I was now sure that Combe Gibbet, where I'd planned to land, was just a glide away. This glide was incredible - sun out, superb clarity, and air like I don't think I've ever experienced before. It was as smooth as glass. Unbelievably so. I could see that there was little wind on the hill with gliders there soaring just above ridge height. This made for a nice easy glide in to top land.

Got a nice reception from Helen and Ella, the latter kind enough to give me a lift home. Definitely an incredibly enjoyable flight for me.