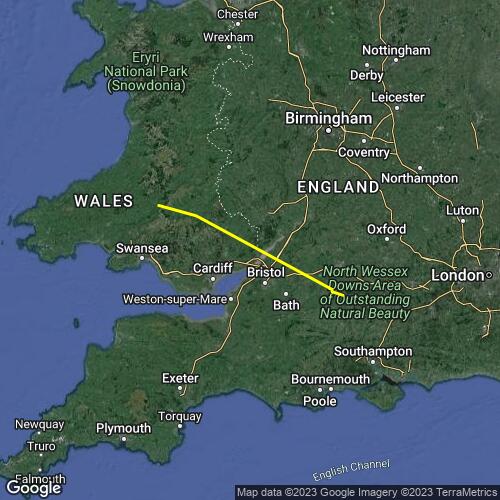 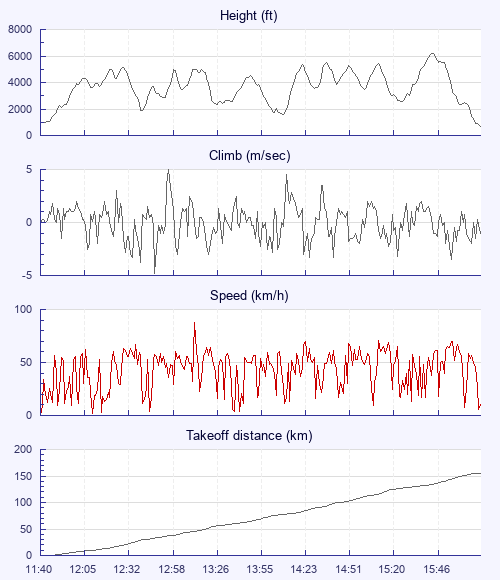 Andrew Craig gave me a lift to the hill. We were worried it might be too windy, but it was fine on launch and cumulus were popping from about 11.30. Andrew launched first and showed me a climb, but sadly he fell out of it while I clung on and eventually got to a 5000' cloudbase. Not bad for midday.

The wind was driving me along and the sky was hazy but with enough clouds always to have something to aim for. I climbed well before crossing the Severn at a wide bit, then took a while to connect with something the other side before getting pinged out after crossing the Wye valley. I could see the Blorenge through the murk and was relieved that my track would take me over it and then into the Crickhowell valley, not into the mountains either side - it was too windy to mess around with them.

A sweet climb got me over six grand in front of Pen-Y-Fan. I had a goal on the coast and the last obstacle was Sennybridge airspace. The wind was taking me towards its southern tip and that way lay one of the few remaining lines of clouds in an increasingly murky sky. But I had to veer further south to avoid both the airspace and a deep gorge which the A40 passes through - I didn't want to end up in there in the strong wind. I crossed the gorge to some higher ground, by which time I was low and failed to connect with anything usable, landing a couple of miles short of Llandovery.

I'd been transmitting my position and Steve Parson got word I was in the area. He kindly scooped me up and whizzed me to Carmarthen train station. Home by 10.30. Tidy, as they say in Wales.