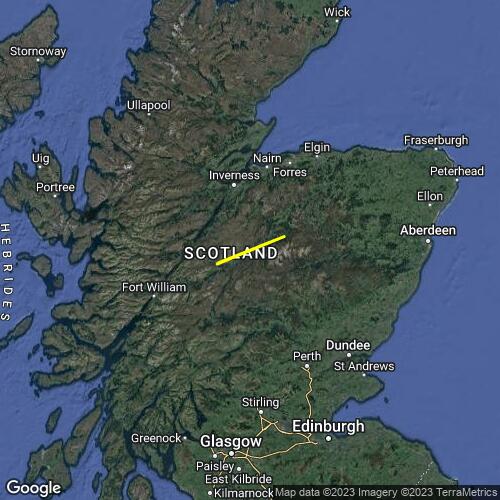 The joy of the unexpected!

Unburdened by the pressure of a competition task, or the declared flight, launching from a significant hill in the Highlands with nothing more planned than, 'lets head east and see how it goes', was wonderfully liberating.

It was a blue day and stronger winds than expected, so the original plan of heading 'over the back' and going downwind into the boonies did not appeal.

Instead Bob and I just decided to head east along the range and see how things felt.

The first half hour was non too encouraging to be honest, with difficult thermals and infuriating inversion layers, yes more than one!

However as we steadilly made our way towards Aviemore the air began to feel better and the predicted convergence clouds began to set up.

Once through the inversion layers we were rewarded with smooth climbs to an impressive 7,600'. We had no coms as Bob's radio was dead and with him on a Delta 2 and me on a Zeno, staying together proved 'interesting'. Suffice to say Bob did a magnificent job of leading out for most of the first half of the flight.

At Loch Morlich, below Cairngorm, we encountered the beginning of cloud deterioration due to the encroaching sea breeze and a quick mid thermal shout to each other confirmed we would turn round and aim to head back.

The sky was, by now, looking very enticing with bands of convergence setting up nicely to waymark our return path.

By this time I allowed myself a flicker of hope that I might actually close the out and return, which at 114k would be non too shabby.

It wasn't to be however as we probably left it twenty minutes too late when we turned round and the day began to shut down.

I landed just 7k short but feeling very satisfied with how the day had panned out, with Bob not far behind near Newtonmore.

From no expectations at the outset we had had a wonderful day 'up there amongst the clouds' above the magnificent Highlands.