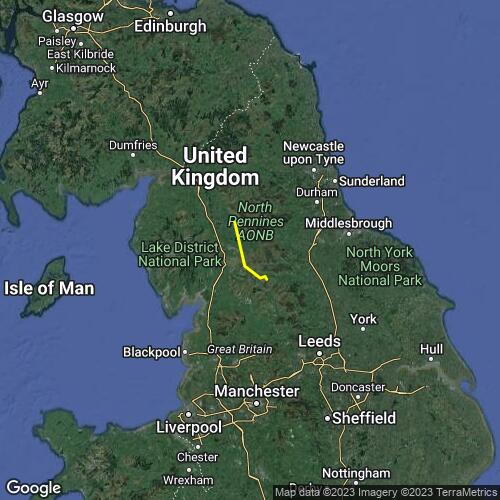 Our run of flyable weather looks to be coming to a close and I needed to work on Monday so Tuesday was my only option this week. Met up with Richard Meek and Martin Underdown at the Creamery Cafe and we discussed the options. My suggestion of the south face on the road over to Dodd Fell didn't fly (errr pun intended) so Semer it was. It felt on enough so we walked up and were joined by new member Dan, Rosie, Jim and Martin Bumford. Not a bad crowd for mid week.

The sky was blue with the odd fluffy Cu but looked a bit milky and fairly inverted. We all had a couple of false starts with cycles coming through that weren't lasting beyond 600m altitude. It was pretty off to the east as well. My third attempt and we were off into a climb that we could build. Richard and I climbed out with Martins, Rosie and Jim in tow. The track became more SE so it was just Semer being a bugger forcing thermal tracks on the hill to be occasionally ENE!

A plan was needed and at this point I probably need to apologise because I may have sold Martin Bunford a dummy by saying we should go for Stags… And then promptly changing direction to head for good cloud forming to the west, triggering off of Wether. Hmmm we'd pretty much committed to staying in a gaggle on a difficult day like today and already one was split from us.

There were climbs over Gayle, but not brilliant and being together paid off as we worked what was there and occasionally explored around for better. It eventually petered out and we decided to head for the Cotter End edge which had work for me previously. It didn't, and we were now at ridge height getting desperate. The sun was on the SW slope and this was forming a climb of sorts. Difficult to work and patchy, it took all of us to find better areas to work. We lost Rosie and then Martin Underdown in the process though, whittling the gaggle down further. They landed at the Moorcock and the strategic placing of a car at Garsdale Head station now looked like a stroke of genius.

Jim, Richard and dribbled onto the lower slopes of Wild Boar Fell and steadily worked up to the ridge proper where Jim found a boomer. Once established, this was a 3 up straight to base. Wild Boar never fails to deliver. Jim treated us to a joke during the climb that modesty forbids me from repeating. I didn't get it until another hour or so into the flight and Richard was less appreciative as he was still scratching below us. From here we headed for clouds to the north and the high ground that leads to Kirby Stephen. We got high again but it was work and took Jim leading out to find some climbs after necky glides.

There's a choice to be made if you're heading this way. It's difficult to stick to the Pennines because Warcop is going to push you out into the valley. The thermal track was too southerly and occasionally SSW so going to Shap and the M6 would be totally cross wind but there the ground rises more so you would have thought it would work better. Anyhow we were committed to the Eden Valley now with the drop to the north and the possibility that we could hit sea air rolling in from the Solway to the north.

Jim left us around Great Ashby, having spent too mush height searching around. Richard and I eeked it out to Appleby in Westmorland where we arrived hoping that the river or castle would trigger. Pleasant though it was to be there, it was not working and it wasn't until we were over the back of the town and the A66 kicking tree tops that we found a climb. Richard was too low to make use of it and dropped into a field on the edge of town. I hung onto it for grim death to try and keep to our plan of heading back into the Pennines. Thermal track was from the S to SSW at this point so the convergence was trying to pull me into the high ground again. I do like settling down into working light lift, it's quite relaxing and Xen like. You can close your eyes and just occasionally look out for birds. Slowly I got back to the height of the fells and decided to head straight for the nearest.

Big mistake. It was sink all the way and I was left confused as to whether wind was falling down off the Pennines or what. I backed out of there and headed north to extend my glide, hitting a bubble which I worked over Dufton. Spotting ravens over Knock Pike, I arrived atridge height and was able to ridge soar it whilst the thermal was coming up but this died away leaving me stranded. I landed behind Knock Christian Centre which brightened my day. If I had to wait for transport, I could probably get a tea and a sermon. No need in the end though Richard arrived with Jim and Martin and I slotted into the car for a ride back to Semer. Thanks guys.

So tips or stuff to remember.

Crossing onto Stags has been a bad idea three out of three times I, or someone with me, has tried it.

Wether seems to reliably trigger off the lee in a SE/E.

Wild Boar Fell is a definitely a place to go for good climbs.

It's hard going down the centre of the Eden Valley.

Find a way to reliably get back into the Pennines after Warcop on days when there's convergence shown in the centre of the country.