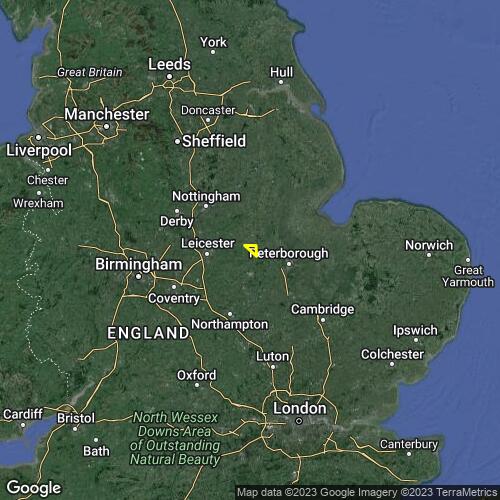 Glorious day and perfect conditions for flying off the winch in the flatlands - with very light winds. Did not seem easy to get up and away with the airfield letting a number of people down - so headed out over an adjacent ploughed field and picked up a climb there to 4.5k. Had a later start, so decided against a bigger declared 60km triangle - though in hindsight could probably still have made it - but the goal for sure was to make the first Tour du Lac of Rutland Water - so decided not to risk it. Went on a long glide to Manton with nothing but sink. Eventually found a slow climb that drifted over Oakham (and which further reduced the temptation of pushing on to Launde Abbey). Here it picked up nicely and reached based at 5.5k, from where I pushed well north to where a sailplane was climbing well, and also so as not to be in the thermal shadow of the reservoir when heading back east. It was impressive to be able to hear a gaggle of pilots flying up over the Malvern Hills - the same lot who were at Garway a week earlier - clearly audible at a hell of a distance. At this height there was much more room for manoeuvre and so made better speed along the north shore with good climbs under well developed clouds and keeping high. More temptation had to be resisted with my next turnpoint on the tip of the runway at Cottesmore a glide away. Once over Empingham I knew it was in the bag, and again had to resist the temptation to head on to Burghley House. Saw Richard Barber pass going the other way at this point - he had a great line and was going fast around the other way. Once back over the airfield boated around for a bit until a hefty collapse convinced me it was time to call it quits and so came into land back at launch, with Richard arriving back with masses of height soon after. Between us we had done the first ever circuits of Rutland Water - clockwise and anticlockwise - by paraglider. What a day! Big thank you to the team on the winch and at launch for making it all possible.