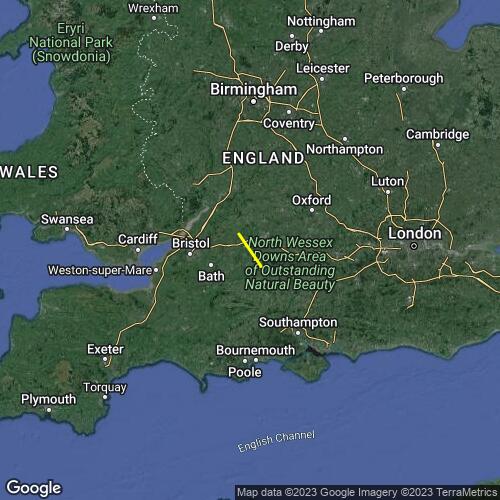 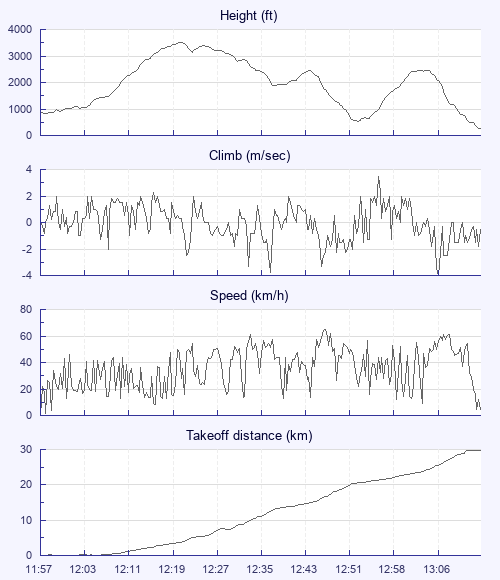 After a frustrating Bank Holiday weekend, I wasn't too hopeful about today, with only a couple of hours in the middle of the day forecast to be very good. But that's all you need for a decent flight. So I scooped up Tim Reeve and went up Golden Ball, noting on the way that a few optimists were on Milk Hill White Horse.

At Golden Ball car park it seemed to have enough east in it to make that the right choice. As I walked up the hill Helen Barnes rang with a sad tale; she'd driven all the way to the hill but forgotten to put her glider in her car. When we got up to launch, I suggested that she go to my house, find the key hidden in my garden, get my Gin Yeti from the cupboard under the stairs, fetch an old cycling helmet from the garage and come back to the hill, but she decided to have a chilled-out day watching us fly instead - she'd already had a quick go on Mick's wing. Meanwhile Tom Cole was very high in front of Milk Hill White Horse, proving that there's more than one way to skin a cat.

Paul Jiggins explored early but landed most of the way down. I saw some crows playing out front in what looked like rising air; I found not much and had my legs out to slope-land when I stumbled into a strong thermal. Rob Kingston and Mike Byfield joined me in the air. Rob took the thermal over the back and was soon well above us, while I dithered about whether to push forward again, but was soon established with Mike in a modest but very pleasant climb, made even lovelier by the view of Silbury Hill and Avebury.

We worked well together - or rather, Mike explored while I stuck like glue to the beepy bits. He outclimbed me, then got lower, then rejoined me to outclimb me again. Finally, as the lift weakened, he shouted: "Andrew - I'm going to head for that cloud" and veered off westwards. I was about to follow him when I noticed what seemed an equally good cloud a bit closer to the north, and charged towards that one.

Mike had a long glide but eventually started climbing; meanwhile Paul was climbing out behind us. My second climb was scrappy, and I considered flying back upwind to join Paul as he got a low save near Avebury. On the one hand, Paul Jiggins on a Zeno was a fairly safe bet to get up; on the other, I might struggle to keep up with Paul Jiggins on a Zeno in the climb, and might be left scrabbling. So I decided to press on with my own flight.

I was surprised to see Mike now high and to the east of me - I hadn't seen him cross my track. I got low as I passed Lyneham, with a housing estate producing nothing. But as I picked out a landing field just before the railway, at 500 feet I found a very punchy core that gave me one of the lowest saves of my flying career. I almost had to spiral in it, and was pleased to cling on until it became more civilised.

But at 2,500 feet I lost it. I then dithered again, this time about whether to try to fly through the gap between South Cerney and Kemble airfields, or to head east of both. The clouds were better due north, but the gap looked small, and I turned north-west. I then glided all the way to the ground, but was very happy to have turned 20k into 30 thanks to my low save, and even happier to have had a beautiful flight over southern England at its finest. I was not too upset by the superb cloud street stretching north.

A very posh man in a tatty Land-Rover who was driving between a memorial service and a funeral gave me a lift to the main road at Great Somerford. Rob then kindly offered, having been picked up by Helen, to come and get me. While I awaited him I got a lift as far as Lyneham with an army officer who wanted to leave and make a career as a pilot. Rob collected me at Lyneham and we drove to Swindon station, where we had time for coffee and cake before Mike arrived on the train from Kemble.

On the drive back to Golden Ball, we discussed how our planet is doomed. But aren't we having fun while it burns!