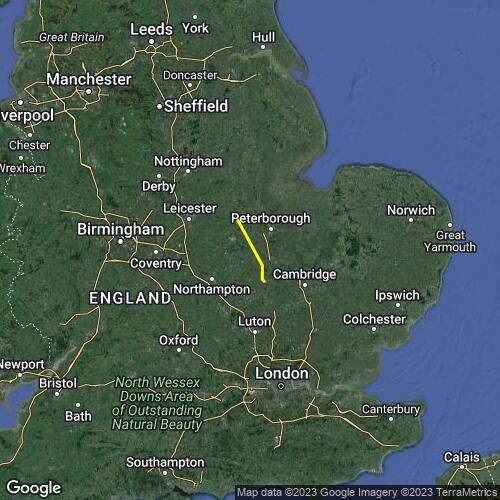 Straight off tow and into a thermal with a steady climb out - despite there being almost total cloud cover and no sun on the airfield at all. Headed off on glide, doubting the possibility of going XC on a day with 15/16 cloud cover. Headed for a patch of sunlight beyond Blatherwycke and was rewarded with a climb that topped out at more than 4ms-1 on the averager - it didn't take much heating to get very powerful lift - RASP was right after all, despite the cloud. Boy was it cold, even having dressed well and my hands intermittently went numb and then became very painful on each glide as I descended and the blood returned, only to repeat the process with the next climb, topping out at more than 5k and the hands going numb again. There were a couple of NOTAMs downwind, and no doubt linked to those was the sight of a Spitfire flying past underneath me, silhouetted against Grafham Water. Frustrating after that to feel the pull of lift over GVS Huntingdon but not wanting to risk getting too close so had to push on, and soon on the deck. Amazed to have got so far on a day with almost zero sun. Nice lady walking her dog gave me a lift to the station and home in no time. Thanks as always to the crew manning the winch and airfield.