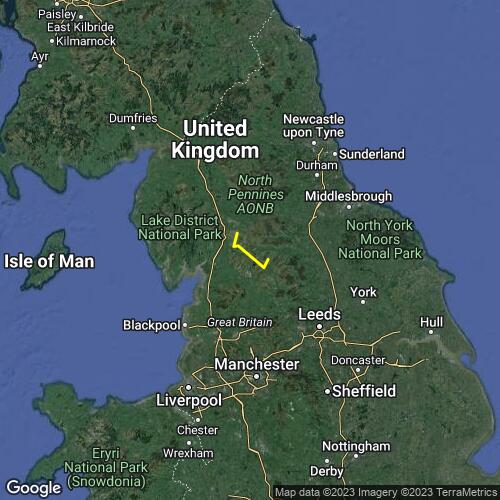 Yesterday was an Odd day. Masses of cloud early on, becalmed on the hill then straight into 2.5m thermals, thermals coming off the south side of hills and the north side and on speed bar in several directions but ground speed not being impressive. Sea breeze issues later on in the middle of the Dales.

A bunch of us launched after 1pm from Green Bell near Ravenstonedale. Not sure where the ideal site was yesterday but we got away so not bad in the end. In the wind direction when the wind was light Ravenstonedale is very shallow so we launched in to the thermal that took us to base. A quick trip down the Howgills with a top up at Cautley Spout and then a sharp left turn onto Knoutberry Haw to get us on it's sunny slopes with good cloud above. Slow going over to Dodd Fell which was by this time deserted except for a few cars. Most glides I did on half bar in several directions with disappointing ground speed. Maybe the air was just thicker yesterday.

A glide down low into Yockenthwaite and a fairly timely save above the freshly mown trees. Classic place to find a thermal. This took us high over Foxup where we could see Pete D, Tim and David May having a fly around Cow Close. Bad mistake here. We thought we could fly north to get back to the car at Ravestonedale but lack of energy in the sky from a 4pm sun and approaching sea air and grey over were going to prove otherwise. The right thing to do would have been to storm down Old Coat Moor to Hawkswick taking top ups and then see if the glide to either Malham or Rhylstone would have worked. That would have kept us away from the sea air for a larger part of the afternoon.

Two of the party were down in Deepdale, Dougie and I squeaked over into Stalling Busk and Jake sank onto Cray. We got a nice retrieve out of the lonely Semer valley straight to the White Hart in Hawes for a pickup from Chris. Gaz who landed near Yockenthwaite got an interesting lift directly back to the car in Ravenstonedale. He left with a free bible, sermon and someone praying for him.

A word on Green Bell / Ravestonedale Common, it's a little used (non official) site now that Northern don't teach there but it does have some things going for it:

It's in the scoring zone for Dales XC flights.

There are several steep bowls facing from NW to NE.

There's a long 60km plus distance to airspace.

It's hard to sink out over the back with the rest of the Howgills to float over.