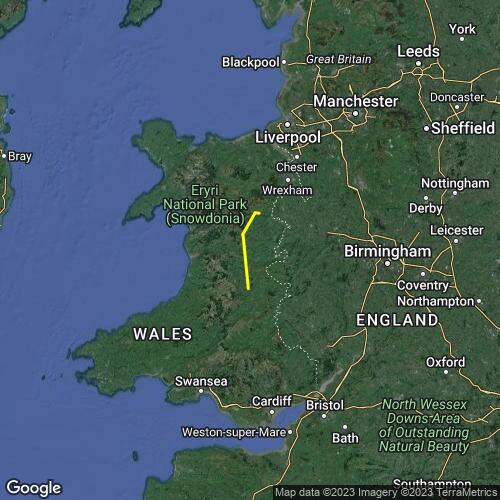 Met up with Gareth Aston and his mates just thinking of heading elsewhere, but we decided to stay. Gareth and I agreed that neither one of us wanted to break the site record, as it belongs to the much missed Steve Nash, and it would be nice to keep it as a memento for a bit longer yet…

It was a slow start, with some roughish climbs going not very high, with unsoarable aor in between. The Kites made the whole experience much more enjoyable (we don't get many in Derbyshire). Then Dougie and Jo Kitchen (a name to watch for I think) showed that good height could be had, and half an hour later we were on our way (Me, Helen Gant, and Dougie Swanson-Low)

We lost sight of Dougie not far from Llandinam, and I got too low there too - but a few kilometers of grovelling below 2000ft finally paid off with a climb back above 3000.

Then cam the remarkable section where we just kept climbing… I was pleased to make it past 4000 as it looked like 3800 was the max from earlier in the flight. I was happy as anything to make it to 5000. I was positively amazed to see 6000. And I ran into a solid inversion just below 7000ft. Pretty certain that's my highest in the UK. (Helen of course had to go one better, and topped up to 7200 as I glided off, a little cloud appearing above her wing as she climbed.

From there it was pretty much all downhill, with just a short snotty climb a few K from the landing. Glad to be down safe - and happy to think we stood a chance of getting back to the car (much thanks again to Jo Kitchen for the lift up the hill)

Landed within a few K of the Gyrn, where I understand it was poor all day with no good climbs to be found. Amazing the difference such a short distance makes.