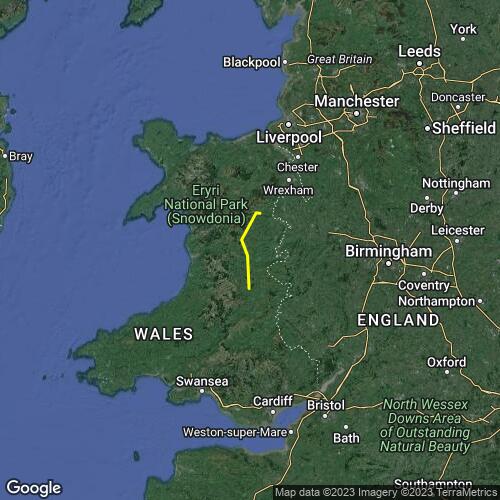 Day full of bonuses… We'd found an empty peaceful campsite even on a sunny easter weekend, birds were singing their socks off in the morning, rabbit hopping about on the grass, cafe for breakfast… Didn't really expect much from Camlo after a hazy start and similar sky to yesterday, but the kites were beautiful, wheeling about teasing us to launch. After a load of unsuccessful hops, got a climb out with Matt and Dougie and dribbled over the back. Initially tempted to try to stay over the high ground after the first climb but on our first glide it appeared that there was a better line of lift away from the high ground, and the wind turbines were moving over the flats but not on the ones over the hill. Best climbs seemed to be on craggy noses into sun, but there was often weak lift behind the rounded hills. Matt got a bit low near Llandinam but a kite showed me the way and he followed and got back up in no time as usual.

As we got towards Clatter we got a booming climb giving us the options of crossing the boonies and windfarms towards further civilisation - had to get back for Matt's work for Mon am so a bombout in the boonies with hours of walking was not an option. Downwind of Clatter Matt got catapulted into space, I couldn't find the bottom of his climb and was getting kicked about in something horrible. Made my usual mistake of trying to get into another pilot's climb rather than fly my own flight, had to pause and reassess (I don't like this air here, I seem to have headwinds in all directions but I'm not going up and I don't want to stay here, what would I do if I was flying on my own? Fly away! ) then found myself a proper lovely climb upto space. Comfortable 5000ft but Matt still higher… Keep going… 6000… I'm still climbing… What's the airspace here? I thought there wasn't any but I've had a few gadget issues recently, and wasn't convinced the giant empty space on my gadgets wasn't just because I'd zoomed in too far or something. Matt still higher though so it's probably ok, he's very careful with airspace… 6500… He's still higher… 6600… No way… 6700… 6800… 6900… 7000… Seven thousand feet! He goes off on a glide. Often that means he's noticed some airspace a few hundred feet higher. I'm still climbing, I decide I'll stop before 7500 in case there is airspace that I can't see on my gadget, and go off on a glide at 7200ish where a lovely cloud has formed that I'd like to stay and play with, but by now I'm in space, I can see hazy mountains for miles and Matt's disappeared off almost out of sight and we'll need to land together if we're going to get back to the car in time for him to get to work the next morning! But wo I've never been so high in the UK! There is convergence heading further into the boonies and mountains, but no guarantee we can get out the other side today so we head towards smaller hills near the gyrn, and a massively sinky glide gets us low into some grabby grumpy air. Matt's a bit ahead and turns back to come to shout to me that it's horrible, I agree with him, we glide away from a climb away from the turbulence and big hills in case that's what's causing the turbulent muck, and find the only field with no sheep in for miles.

Lovely hitching back… A couple of Poles made space for us after a day trip to the waterfall, then 2 young smily women who'd been for a pub lunch, then a lady who'd been to Chester for the easter services, then a musician on her way back to Cardiff dropped us back at Rhayader… Then Jo Kitchen who had done a very tidy demo of how to get up from the bottom of the hill then fly off over the back came to take us back to the car before sunset, thanks Jo! Ordered a pizza en route and still beat google maps time by 3 minutes: -) Brilliant end to a lovely weekend.