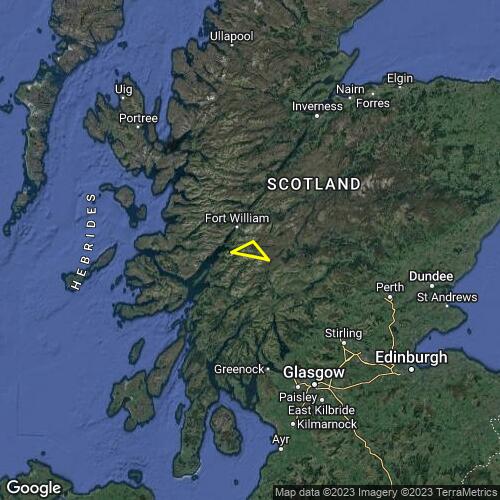 My first time flying at Glencoe. The weather looked very promising, and the excitemnet was in the air as a large group of pilots trickled into the carpark for a 10am start up the gondola.

Fran and I had met with Jules Robinson at the bottom, who'd suggested we tried a 75km FAI triangle. We decided to go for this, however there was a bit of faffing on launch and we didn't get away together. I launched in the first gaggle, and had probably been an intolerable 'Princess Now ' for a while before that.

A slow start matured into a nice gentle climb to base from the Glencoe Ski Centre Car park, and seeing nobody else launching, I radioed my intent to cross to the south faces opposite and to make my way West.

It wasn't proper gaggle flying; I was alternating climbs with Ben (from the Lakes) on his Zeno, and I could see Tim Bridle ahead on his Poison X-Alps showing me that it was working.

I flew the high line above the rocks on Anoach Egach, alternating between a glide in zeroes and topping up to base which was steadily rising above 1600m, before crossing to the South of Glencoe by way of Meall Mor. Topping up in a climb off this rond, flat-topped hill, I was joined by Fred Robinson and Tim Bridle coming in below me, but I 3km to my first turnpoint so I nipped off to tag that.

This was about an hour into the flight, and my hands were painful, aching, blokcs of ice. Gliding North over Loch Leven, I took a chance and swapped out my thin gloves for some heavy mountaineering gauntlets that I'd stashed in my harness. The Hot Aches and relief were incredible. Tears were shed. Tears then froze. It was cold up there.

The next part of the flight was quite tricky; I scratched for a series of weak climbs in the lee of Tom Meadhoin to get me up to ridge height, and then scrapped my way along the ridgeline to the North of Loch Leven. Pushing into wind, I couldn't take every climb to it's top as this would push me back, so I set a mental top out limit of 1300m, and got on bar to push ENE every time I made this small goal.

As the ridge terminated, I took a nice climb to base and was able to push on past the town of Kinlochmore, and out over the proper boonies of Anaoch Mor. It was here that I eventually abandoned my task. There was 12km to the second turnpoint and a big, blue hole in between. I waited for two cycles to see if I something would cook up that i could use, or to push further east and try to make this glide less of an into-wind push. I have to be honest, the thought of a 20km walk across the freezing bog was not very appealing if I had failed.

Steadily getting lower, I finally cut my losses and started a glide to take me over Blackwater Reservoir to take the sting off the walk out. This glide brought me into a nice 3 up climb, during the process of which I spied Jules skimming along on his Boom 11 in the direction of the 2nd turnpoint! He would eventually close the flight, he's evidently not shy of a long walk!

I had a good glide across the Mor. I could see the carpark, and I could see gliders climbing; even my fingers felt warmer (or I was hallucinating) by this point. I blundered into a lovely soft climb as I crossed the road and cruised up to 1500m again, then decided to tack a bit on to the flight by way of a short out-and-return leg to the East end of Anoach Mor and back.

It was a deliriously happy romp back, recognising so many fellow pilots in the air and with the white tops of the hills glistening in the afternoon sun.

A great way to start the season and to introduce myself to the White Corries.