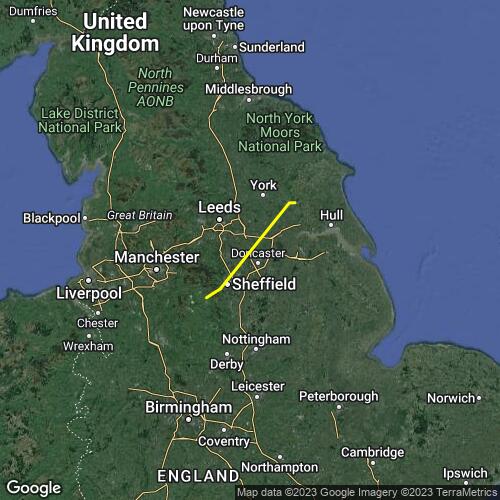 Great fun. All on my own this week after the first climb. It was a proper spring day (apart from the fact it was in August) - cold air, strong climbs, early start. I took off first to try and get away before the BP Cup launch window opened and it all became chaos on the ridge. It was soarable, so Helen Gant joined me and we climbed out together at 10:45. I think that's the earliest I've ever gone XC. Certainly from an inland site.

Got quite low on the SW edge of Sheffield and thought I might have to land, but there were enough bomb out options, so I decided to try and drift in a weak climb and hope it got better. It did, very very slowly and I'd crossed Sheffield by the time it really turned into something decent. That gave me loads of time to identify the sights from the air though. I flew right over my old students' union and spotted my old house from the air.

Another highlight was flying over Eggborough power station and peering right down into the cooling towers.

Probably should have gone further, but I was unlucky with some good looking clouds falling apart when I flew under them, then went to a cloud near Pocklington gliding club, but when I got the climb I was right on the edge of their airspace and I wasn't sure if I was allowed to fly in it, so I turned around.