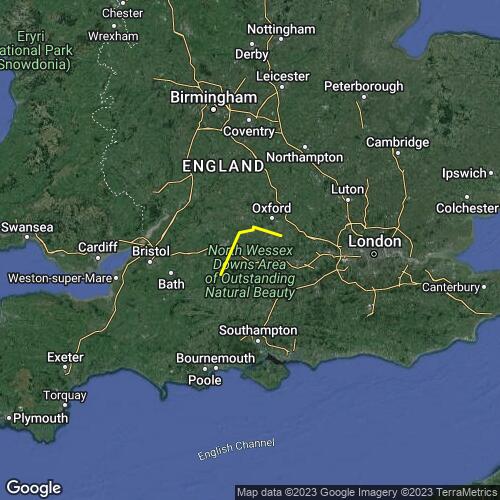 Sunday turned out to be a great day!

Not a pb but I flew 69 Km & joined the mile high club @ 1700meters for the first time in the UK, & did a lot of cross wind flying which is another first.

The lift had been patchy & it had not been consistently soarable so people had been flying in thermal cycles. Not ideal from my point of view, I prefer a ridge soarable day to explore & hunt for thermals & take my time.

So I launched into the first proper gaggle starting to form & climb. We had a decent climb out but it petered out & broke up so the gaggle scattered somewhat but headed to the east side of Swindon.

I hesitated somewhat as I approached Redlands airspace, but went east, with the majority. I could see Peggy Williams heading north of Swindon on her own having already gone around the west of it. A few appeared to fly through Redlands.

I kept heading downwind then at Farringdon realised I was now pinned up against Brize Norton. Again had to make an east / decision so went east as I could see a gap in the airspace that way. So I was having to fly 90 degrees cross wind which meant flying into wind slightly & poor glide angles after taking each thermal I could find.

But the time I approached Abingdon tierdness was starting to set in & I needed to pee. At this point I should have headed more north around the airspace up past Oxford. Instead I aimed at Didcot knowing there was train station there. But the ground at Didcot looked rough, & lots of power lines etc so continued on past it. I half halfheartedly took another climb (my legs were crossed), just enough to pick out a decent sized village next to a river / canal. So landed in a large green field next to the canal. 5 minutes walk & there were 3 pubs so made myself comfortable.

Getting back to the hill was a mare. My other half ended up driving from Lee on solent to pick me up & collected Marcin & one other from Oxford. Got back to Milk about 10pm!