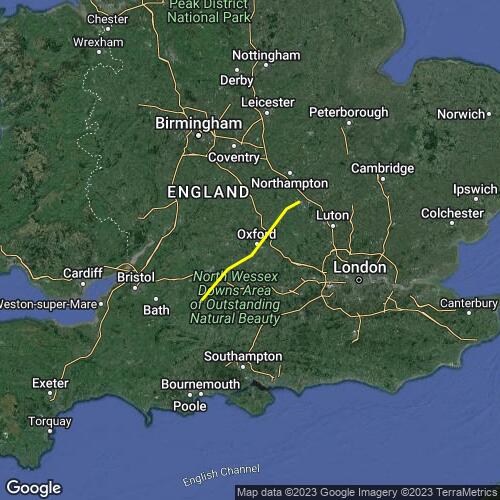 A lift to the hill with Gus and RJ. Good incentive to get away.

Bowl or spur? Big cheeses on the spur. Bowl will suit me.

Looks smooth and buoyant here. Hugh's up on his own from the spur.

Then Craig and Kirsty. Slim pickings for the rest.

Hang on. A huge spur gaggle is off. Seventeen of them!

Then six more. A white Phantom is up here.

Time to launch. Get off and hope.

Up we go, Frazer as well. It's sporty.

Bottom of the stack as usual. Hang on over the fields behind.

Could go either way.

Now I'm catching up some of the pack. Promising.

There's Silbury Hill. Always a joy from the air.

Past the A4 and we're at base. One or two disappearing into it.

Now it's slow and gentle. Circling in zeroes.

Have a drink. Stuff a muesli bar into my gob.

Ashley's catching up on his Artik.

Stuart's with us on his Explorer.

Two 777 Kings are marking the lift.

Past Aldbourne. A longer flight than yesterday's 20k.

Off the downs at Uffington. It often gets hard here.

Sure enough, I can't get to base past Wantage.

Train to Swindon? Don't think about retrieves yet.

Over my old college, and the Oxford United ground.

A Zeno is to my right. Low.

Press on into the blue. See what happens.

Past Otmoor. Hope they don't build a road over it.

Not getting near base now. A gaggle ahead, much higher.

But there's a red kite, wandering. A bit of lift.

There's Padbury. Landed there for my best three years ago.

But this time I find the climb! It's strong.

I'm sobbing at the sight of Milton Keynes.

Seventeen since my first cross-country.

Twelve since my first 50k.

A year ago I thought I might have to stop flying.

Must send my physio a card.

Concentrate now. It's windy and rough.

The fields before the town? But I'm in lift again.

That sports ground? Or try for near the station?

Now I'm committed to the playing field, they're thrashing.

Down inelegantly. Bad selfie. Not a soul about.

I'm halfway over the gate. I see a child in the playground.

Whistle nonchalantly into the school. A cleaner lets me out.

Hot walk to the station.

Gus got one too.

And while I'm in Gwynnie mode, I'd like to thank:

The pioneers - Elmer of Malmesbury, who broke his legs in the 10th century, and Otto Lilienthal and Percy Pilcher, who lost their lives at the end of the 19th, trying to do what's so easy (sometimes) for us now. Barish, Rogallo, Jalbert.

The nutters who first thought of running off mountains with parachutes, or soaring them on windy Welsh slopes.

Those who taught me to fly - Pete Bernon, Mike Hartley and Baz Philpott. I wasn't the most gifted student.

The designers who've produced such wonderful wings, particularly Gin Seok Song and Hannes Papesh. Steve Purdie for supplying them to me at generous prices, and for being brave enough to take me on as a trainee instructor.

The ones that have helped me learn thermal flying on trips abroad, including, but not limited to: the Fly Mexico team, Steve again, Hairy Dave Lewis, Chris Craven, Owen Latham, Steve Ham, Carlo Borsattino, Mark Watts, the Verbier Summits team, Toby Colombe and Kelly Farina (buy his book, Mastering Paragliding - it's excellent). And Matt Pepper, who wasn't even getting paid for it.

The pilots in the Southern Hang Gliding Club who've helped me to avoid most of the worst mistakes. It's hard to know who to pick out, but certainly Dave Massie and Simon Steel. The ones who unpicked my wing from the bushes and me from the barbed-wire fence.

The goatherd who helped me down a tree in India, and the boys who fished out my glider and reserve.

Those I've left in the 90s club - Peggy Williams left it last year, and I think it won't be long for Mark Rubinstein and James Hope-Lang.

Everyone who's given me a lift back from a cross-country - the German hippy by Lake Annecy, the motorcyclist in Glen Spean, the family on the way back from burying their Uncle Vern.

The surgeon who fixed my hip. And if you need a physiotherapist in the Pewsey area, she's Mary Nocton.

The club sites officers who have such a hard job to keep the hills open for us.

Most of all, the pilots who keep me company before, during and after our flights.