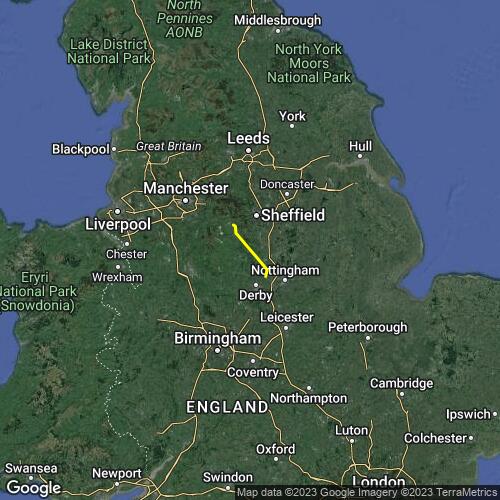 I was flying with my GPS airmap zoomed out further than usual, as I was looking out for airspace downwind, which was getting progressively lower & lower. I was also getting lower & lower, until it was time to look for a landing field. There was no other air-traffic around. There was a small grass runway strip dead ahead. There was nothing on the runway, nothing had taken off from the runway, I had a good look around & there was nothing flying a circuit. I thought about being "polite" & landing on the field next to the airfield, but oh no. I might as well put it down right on the centreline. So I did. I moved my gear away from the runway & into the next field to pack up. I found the farmer who made me a cup of coffee & showed me the airfield office. I signed the airfield logbook as a paraglider flying cross country from Bradwell. The airfield owner turned up a few minutes later, who was a friendly chap & stopped for a chat. He told me that the airfield was mainly used for a microlight club, & it was also open to anything making an emergency landing, such as light aircraft, sailplanes, (& paragliders), he made me a cup of coffee & then gave me a lift to the train station.