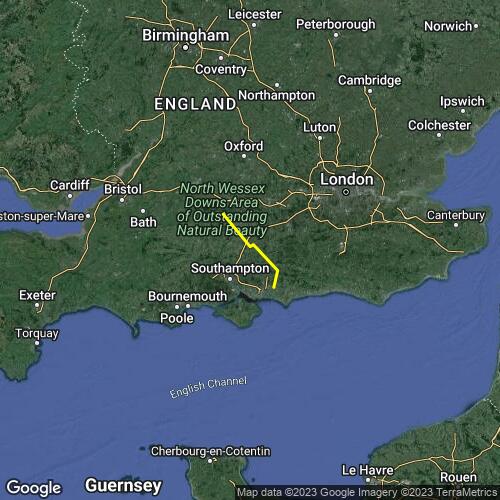 This flight was for the BCC round at Combe Gibbet. Unfortunately due to borderline conditions the competition was cancelled. It was very gusty on launch, the wind off to the west & that unhelpful combination of people thermalling low down & others trying to ridge soar so sensible call.

Regardless, I had picked my moment to launch & found some space to climb up before committing to a thermal. My thermal joined with another but just 3 of us left the hill. One of wings was Orange/Black & I had assumed it was Chris Drabble, but was probably Peter Baines.

Up to Whitchurch was a struggle. The thermals were very rough & broken & it was impossible to turn completely in them. I did see another wing get a better climb but I've made the mistake of thermal envy before only to encounter massive sink in between so stuck with what I had & kept working it till it petered out then went for a glide over Whitchurch.

I picked up a few more scraps of lift the other side of Whitchurch where a sailplane came over to play but unimpressed it soon went on its way. There were more scrappy thermals on the approach to Popham airfield. I adjusted my track so as not to fly over & was watching aircraft take off & land & fly circuits well below me.

Shortly after the airspace warning went off. I think i set it to 2Km so was still a safe distance but it looked like my track would cut it a bit fine so headed cross wind & decided to follow a road as I was getting low. A low save followed and after a glide I approached four marks. I had another climb out from there and my goal at Petersfield was within reach.

Reading the rules I didn't do the declaration quite right & couldn't enter it. But the flymaster Binged & told me I'd hit it.

Having reached goal with plenty of height, the fields around Petersfield lake looked like a nicer landing spot & as I headed over it became rough & bumpy & probably would not have made for happy landings so took my final climb of the day.

The wind was rather west & there didn't seem to be much going on around the downs. Butser was well to the west so aiming there seemed like folly. So I headed for the coast, following parallel to the A3(M). Looks like that was rather cross wind! At some point the airspace warning went off for Chichester but I wasn't going anywhere near it.

Arrived at Emsworth with plenty of height, didn't want to get wet, most of the fields looked in crop, & there were lots of built up areas I didn't want to land in. I picked out an area of rough looking land with a pond & children's park at one end. It turned out to be full of thistles but I put feet down on a path. Turns out it was next to Stuart Garbutt's school!

Dropped my pin to left everyone know I was OK & one of the locals let me know I was at Emsworth & chatted as I packed up. A quick call home & a scout about revealed it was less than a mile to the train station. So was a quick train ride to Fareham to meet my other half for a lift home. Retrieved the car on Sunday.

So, this was a new PB, a first attempt to reach a goal & fulfillment of a personal goal to fly from Combe to the south downs. Quite a day out: ) And a blue sky day.