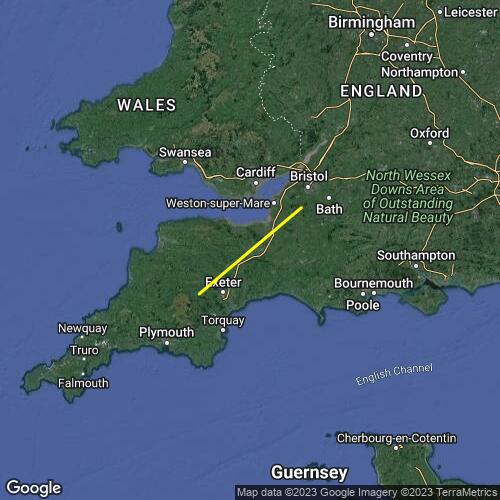 RASP was not looking brilliant, with a thin streak of good air (3 stars) from Bristol to Exeter. The trouble is that in a NE, its difficult to find a site that you can do 100k from.

Lovely day and about 20 pilots turned out. Its was quite windy, a bit off to the east but thermals were coming through, just not very strong ones. I started sitting up high, but tried to push forward by myself and got low. Then I didnt seem to be able to get any height at all and was left thrashing with the trees while others floated around well above my head. This continued for ages, and having left a crappy thermal I was surprised to see that almost everyone had climbed out and left the hill! That left Rob Kingston and myself and one other…

I had pretty well decided to knock it on the head when I found a decent climb and took it up to 2800. I had been flying for 2 hours! Rob could pick me up from a short hop I thought, then he was up there chasing me… Oh well. I maintained well over the Mendips and then dived towards Wedmore, where I was lucky to get a scrappy climb. Rob was always a few hundred feet below me and sadly he landed there. There was a clear line of clouds to follow and I started to cruise along buoyant air between 3000 and 4000ft in a good breeze. From then on there were big convergence clouds with a base around 5000ft taking me over Bridgewater and Taunton, where I caught up Ben Friedland, Tom J and Ollie Clothier. I headed for fully formed clouds and they worked, as did the little bits of fluff. The sky got bluer after Wellington, and I didnt realise that some of the people that I had been flying with landed (Tim P and Graham R among them). I got low once (1700) but got lucky. From then on it became easy, as the blue filled in with the occasional puff and cloud, all of which worked. I got high over Crediton and realised the flight was in the bag. The wind was a strong NW when I landed so I couldnt have gone much further. 103k declared.

The return was sweet. I walked towards the A 30 to hitch the Exeter and the first vehicle was a bus which took me to Exeter station. I got on the train to Bristol as the doors were closing, but approaching Bristol, the train was delayed a few minutes, meaning I would miss my last connection. Luckily that train to Sea Mills was also delayed so I was at Robs house (with my car) at 8pm! It was my lucky day.

A great fun day out for an old git!