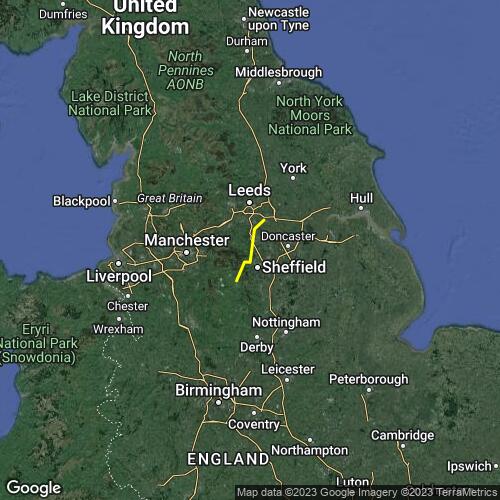 Another weekend day, another XC. That's 4 XCs in the last two weekends.

This one was easy and very hard. 5500ft cloudbase and every cloud seemed to work. Tried to crosswind to the east to get around Leeds airspace, but it was all blue to the east, so I was waiting and watching for my opportunity, but it never came. Eventually I found a super strong core right on the edge of the 3000ft airspace which I obviously had to leave. I tried to punch back upwind to the higher airspace, but I wasn't making much headway against the wind, so made a last ditch attempt to dive under the 3000ft, but inevitably landed. Not before watching a bit of a cricket match from 700ft above though.

I planned to land next to the cricket ground, but found some lift that felt like it might be good enough to take so did a couple of circles. In the end it didn't feel good enough to drift low over the town with it. With the wind and the sink I couldn't make it back to the cricket, so ended up landing in the school playing fields on the other side of the road. Befriended a couple of teenagers after they'd called the fire brigade because they thought I was in distress. Luckily I managed talk to the emergency responder before anything was dispatched. She seemed adamant to know that someone was coming to get me. I wonder what would have happened had I truthfully said no. Would I have got a retrieve in a fire engine?

Luckily one of the kids knew someone whose house backed onto the field I'd landed in, so they let me out through their garden rather than having to scale the fence.

I'm well on my way to one of my aims this year - to have 6 flights in the league over 50km. The other is to fly 100km (in the UK). That seems to be really hard. It seems to be some combination of flying quite fast and keeping your concentration for a long time. At the moment I can do one or the other.