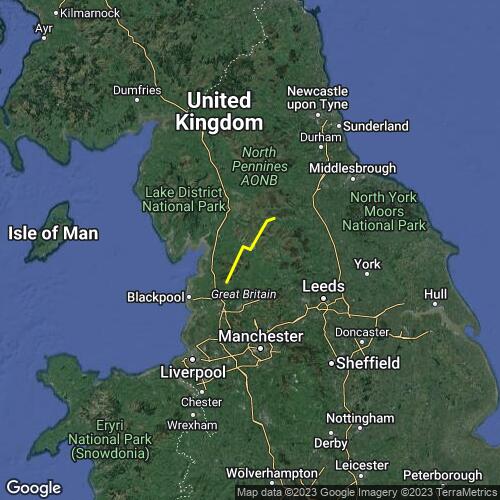 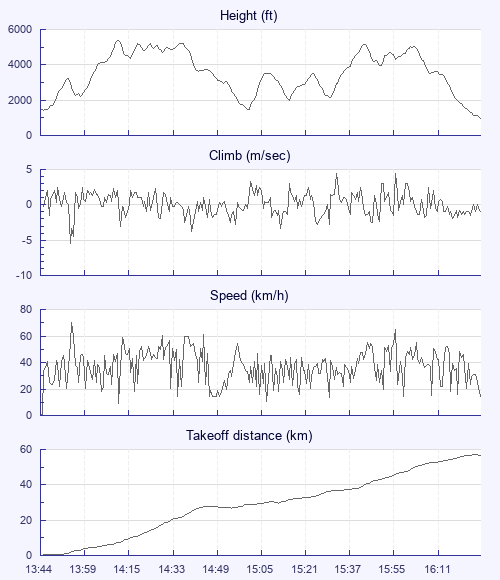 A flight of two halves. The first half was flirting with the sea air because I'd been flying like a numpty early on and not managed to climb out 'til quite late. The sea air made it super hazy, so you could barely see beyond about 5km away and the clouds merged into the haze, so the only way to see where the clouds were was to look for their shadows. The second half was in beautiful clear air flying over the stunning landscape of the Yorkshire Dales.

After the inital climb out disappeared just above 3000ft I felt like I was going to bomb out on the moors as I had to fly full speed through some 5m/s sink. Luckily I got another climb, helped out by some seagulls, that took me beyond 5000ft and connected with a great cloud street. I hardly had to turn for the next 15-20km, just stayed above 4500.

After that I think I strayed into the sea air a bit in the gap between the Bowland Fells and the Dales, so while Ingleborough looked like the obvious trigger point, I diverted east to get back towards the clouds. Luckily a rocky south facing escarpment worked as well as it looked like it would and got me back up to 3500ft where there was a nasty inversion which tested my nerves a few times and put a lid on the climbs in the middle section of the flight.

I think I got a bit indecisive and confused at the end of the flight. I was faffing around in the middle of a valley trying to connect with nearby clouds when I should have probably just flown over to the hills on the other side. When I landed though, all the clouds looked a bit ragged and they seemed to dissipate fairly soon after, so at least I wasn't looking up at an epic sky.

Getting back, I managed to hitch a lift on a bus - the driver picked me up in the middle of nowhere and didn't charge me a fare - got the Carlisle to Settle railway which has to be the prettiest train journey in England, then Ed Cleasby gave me a lift back to the hill.