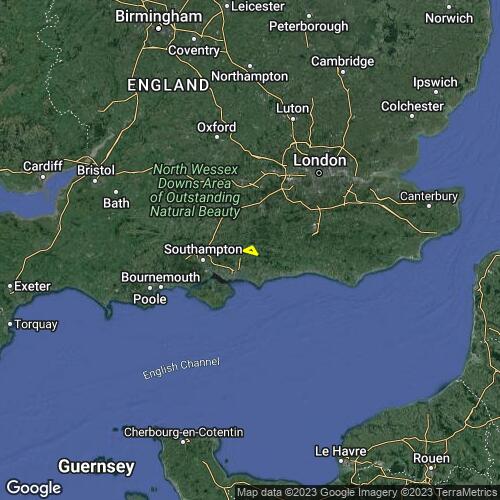 OK, so it was a sneaky one, not to say a little naughty: I left the house at 11:30 with Mrs. W downstairs, slaving away in the office, thinking I was still painting the bathroom and my older son's bedroom. Jan had kindly invited me to join him at a launch that I hadn't visited before - one needing the private consent of the landowner.

I arrived to find 2 out of the 3 other pilots up, just above ridge height, but zilch wind and the thermal tailing off, which soon decked them. Dave H. & I alternated with a few "Into the Void" launches and promptly side landed each time; Jan & Michel, were slightly higher up the hill, more on the plateau, behind the fence and set back from the face - so harder for them to feel when something was coming through - it proved to be a good tip Dave, thank you…

Nothing, but shimmering heat and insects humming, perfect soma, no birds, nothing but trickling sweat for 30 mins and more top cover coming over, though a few crisp looking Cus well off to the East, holding a little promise yet.

How long can I hang on here before the increasingly likely phone call from the Home Office, wondering why the Bosham painting program is behind schedule?

Then two black darts shoot straight out of the trees on the next nose 100m to the East: sinky, sinky for 100m - then whoosh, they're climbing at 45° and speck out before I've been able to call the others, it's pulling so hard the breeze is coming over the back at 5-10kph. Hmmm, it's definitely working then. I decide to wait 'til the lull, count a couple of minutes or forward launch at the first sign of the next whiffling breeze.

Hey presto, it works, the others scramble into the bottom of it, Michel hooks in and goes very low over the back - really committed - whilst I'm still climbing off the front face, but it works and his develops into a stronger core to which I migrate, and we're away. We separate in the first climb, and I decide on what turns into a lovely little triangle to Buster, Rogate and back to launch - but unawares that the min FAI triangle distance for the 2x multiplier is 25km, dimwit!

Burning off the last 2,000' in a spiral dive, having closed the triangle seemed like a good idea at the time: load up the wing & avoid the washing machine of the SBF that I had to pass through, though in the end it proved utterly benign. I landed with a firm southerly SBF, dropping me on to launch at 2.5m/s. Had I done any prep for the triangle or any prior reading, I could easily have shot off East for another 1.5km to breach 25km to get the 2x multiplier, and still had height to burn. Bah-humbug, next time!

But I had to get home to finish the painting, my 2hr lunchtime jolly, hopefully unnoticed. I'm writing this as Sophie enters the office: "What are you doing, planning your next flight? Have you finished the painting? "

"Yes dear, but I'm off to put the second coat on now. " Smiles awkwardly to self, wondering whether it's better to 'fess up or hope it fades away, unnoticed: )