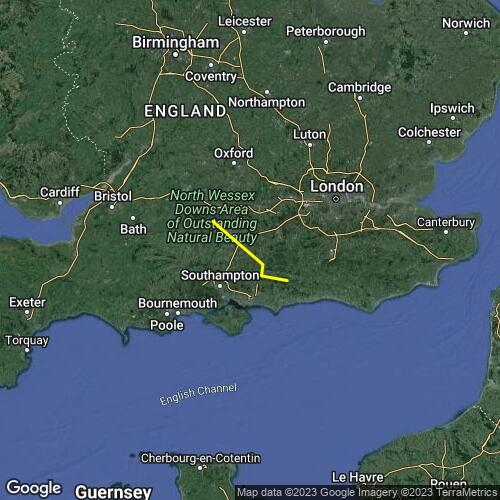 I was feeling the need of a good XC to get me back in the swing of things. Coombe looked like the place to go on RASP and a bunch of other pilots agreed so we all set off this morning. Arrived to find it very west and no one flying. Missed the first thermal that came through and sat on the hill watching several pilots climbing to base. There was then very little for the next hour and I was beginning to have that feeling of another wasted day. Then a bit of lift came through about pilots took to the air and I joined them. The first ones had a better climb but were drifting over the back very low. I left them and saw Ked heading towards the woods at the West end of the site. I saw him get a little kick as he went that way as I was higher figured it was worth a look and then all the months and months of working light thermals and improving my climbing with a busy group of pilots paid off. The broken thermal became less bitty and a bunch of us started getting up and kept going to about 4500 with very little drift. I then decided to head off down the ridge to the east( prompted by a chat with Craig Atwell before launching who had said that was the best way to go and just keep going till you found the next climb)

I had to go about 5k before finding the next climb and was pretty convinced I was going to bomb but found something worked it and it turned out to be a ride back to 4000.

The erst of the flight kind of carried on in that vein.

Joined up with another pilot around 25 K out. The he took off to the west and got a brilliant climb. I persisted on my route and found one as well. He then hit some bad sink and was on he deck and I managed to find another climb ( very slow) and eventually get back up again.

I then got a bit fixated on getting to my next turn point - which it turns out I had placed very badly - south of Petersfield. You can see that quite clearly on the track log. I should have just kept going on the track I was on. Anyway finally got to the south downs and I could see the Sea Breeze coming in fast. Tried to stay ahead of it but failed and ended landing.

I managed to find a playing field with a group of people in it with cars. So thought that could help. Turned out they were all parents waiting for their kids who had got lost on the Duke of Edinburugh awards hike and were running 2 hours late. I explained to them that I just flown about 50 miles and had to get to Brighton and which way should I start walking for a main road when one of them offered to drive me to Chichester station once her daughter had arrived. I accepted and so got a lift from the landing field direct to the station. Then at Brighton Mark Rubenstein very kindly picked me up and dropped me back at my car near the Hove roundabout.

So a great day but still so much to learn.