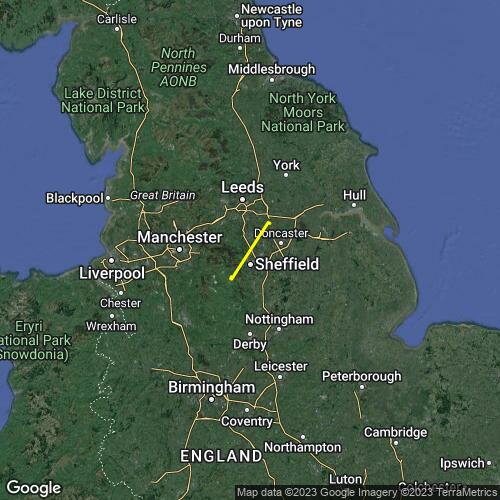 A bit of a bumpy flight from Eyam, but very enjoyable. I've not managed to do much gaggle flying before. I think I'm usually a bit slow and bimbling and get left behind. Today, I was the one getting impatient and everyone else was milking the climbs all the way to the top.

It was mostly blue though, so patience and using the gaggle was key. We worked well together until half of our gaggle got left behind when they were in a crappy thermal nearby and didn't spot three of us rocketing up into orbit. In my impatience - I'd set a 110km goal north of York - I set off once we got to the top of the climb expecting the other two to follow, but they hung back, presumably waiting for the others.

That turned out to be a fatal mistake. I went on an extended glide to the ground, via lots of circling in zeros and dropping onto the only terrain feature for miles around which just happened to be a tree lined ridge facing into wind with a village and a brown field at the bottom of it. It looked absolutely textbook, but after 20 minutes of soaring, it hadn't produced anything and I got flushed down to the bottom.

I had hoped that the driving instructor who had stopped his car at the bottom to take photos of me might be a fruitful source of a retrieve, but he zoomed off as soon as I landed, so didn't even get chance to speak to him.

That left me with a nearly 2 hour walk to the nearest train station. Bumped into Chris Ashman on the train who made it almost to my goal and it turned out he was one of the two gliders I left behind when I impatiently went on glide. I've gone from being too slow, to being too impatient. Need to find that perfect balance.