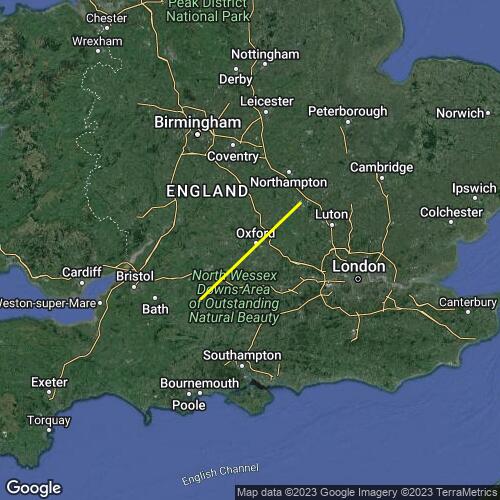 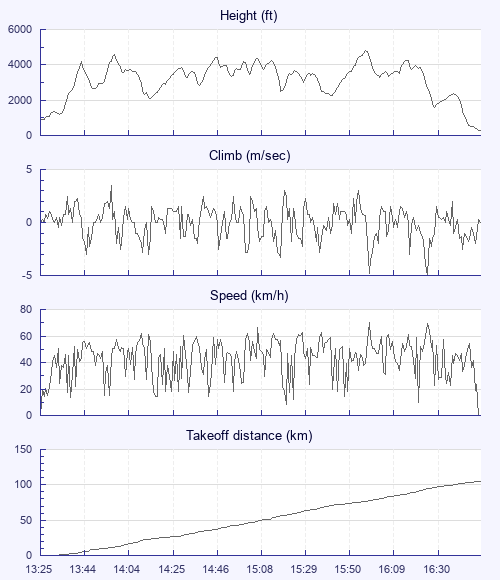 We spent a long time on the hill trying to get height. Beautiful sky and no one could get up. Same on Rybury. I thought the day was not going to work.

Then a Guy A and Jim Mallinson got a couple of hundred feet up, and I tried yet again. I struggled to around 400 ATO and could see others had climbed a bit more. I committed to going over the back with little hope. I have heard that often the best climb is in the lee, and from a remarkably low start, I got a decent climb to around 4000ft. Jim, and Guy with a couple of others were low and we all happily climbed to base. I did my usual 'lead out the fast gliders on a 'B' wing but stupidly picked the wrong cloud!

All was good tho and the sky was excellent, with climbs easy to find and we were off. I really expected the day to be short as there was a massive amount of high cloud around and he sun was partially blocked in places. It seemed pretty sunny where I was though but expected to be down soon. Every little puff of cloud lifted. Great air mass! Finally approaching MK there was serious thick high cloud that blocked the sun yet even then the air was very buoyant. Massive sink nearly put me down though and I scraped the lat few km in. I flew over the town at less than 2000 jumping from potential landing sites. I scraped in to my declare right by the station with a few hundred feet to spare.

Sitting on the crowded train to Birmingham, Graham Richards entered the same train carriage. He had done 110k declared from Frocester to Northampton! I got back to Bristol and went to join my old climbing mates for our monthly curry do. You can still have fun when a few months away from my old age pension!

My first flight on my Iota 2. Very nice indeed!