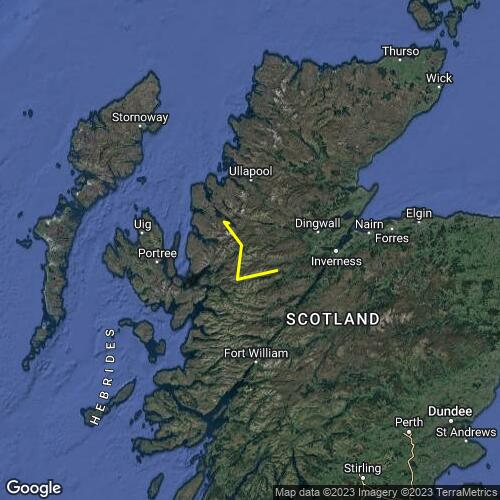 After a PB smashing flight from Strathfarrar to the west coast yesterday, Przemek stayed at my house and we woke to frost and bright sunshine and another day with epic potential.

The Aberdeen crowd, who had overnighted in Achnasheen, headed our way and we convoyed into Glen Cannich, climbed An Soutar and then sat about pondering the blue sky and relative lack of clouds for a while. During this time Jules patiently read out the co-ords of his 100km declared triangle several times to us amateurs, struggling with our various instruments.

Some puffs started coming through and got stronger and more regular at about 12.15pm. Kieran led the way and after a bit of scratching was heading upwards. Jules, Matt, myself and Richard Carter went soon after. I made a pig's ear of climbing out and by the time I was in a decent climb Kieran was in the stratosphere and Jules and Richard were half way there. I was playing catch up for the next hour. However, they marked the way for me and I was able to boot the bar between climbs and slowly reel them in. We headed west along the bottom edge of the triangle. From 6500ft the fact that I was passing the end of the public road in Glen Cannich and heading into the boonies, seemed strangely disinteresting.

I had realised on launch that I had left my external battery charging on the kitchen table. Sure enough as soon as my phone got cold, it died. And my declared flight, thermal tracker and maps went with it. This was a bloody nuisance but also liberating. No more looking at a screen - read the ground and clouds and listen to the vario. (And follow Jules! )

The air clarity was superb - the views incredible. The clouds were getting bigger and the climbs stronger. I passed under one quite dark one - dolphining my way along under it at about 6000ft and once I was past it I looked back and was a little alarmed to see how large and muscular it looked.

A curtain of low hanging cloud marked the convergence in front of us and I enjoyed proper convergence flying for the first time. I had finally caught up with Jules, Kieran and Richard and was feeling pretty smug. Then I made a mistake, got low and Jules and Richard shot off high above me. Keiran and I joined forces and climbed out together, getting closer and closer as we banked the gliders into the core. For a few fleeting moments our wingtips were just a few feet apart - we were hollering to each other in pure joy and I felt a surge of elation. Then we drifted apart but continued to fly together, heading NE for the next leg of the triangle. We got stuck in a blue hole and drifted in zeros for a while. We noted a glider to our south, heading our way. Just as we started to climb Khaled joined us and the three of us flew together for the next 40 minutes or so, working together to cross a difficult patch until we reach a large cloud and the problem of weak lift became one of cloud suck.

As we reached Torridon there was quite a lot of rain to the east of us and we were flying under sucky clouds while being lightly snowed on. We decided to abandon the triangle. I skirted a large black cloud and was doing 2mps up in a straight line at 6000ft, even while flying away from it. I flew into a blue hole with some relief over Glen Torridon and then hit a beautiful smooth strong climb over the summit of Beinn Eighe. Keiran was behind me and catching up but couldn't find the same climb, so peeled off west down Glen Torridon. I decided to try to fly as far north as possible up the south side of Loch Maree. As I passed over Beinn Eighe I heard and then saw a mountain rescue helicopter below me, dropping orange smoke onto the N flanks of the mountain.

I headed north but was getting lower and lower and was on a final glide against the sea breeze towards the Loch Maree Hotel, when I hit weak lift. I drifted back towards Beinn Eighe in zeros but was failing to climb so I booted the bar through sinky air to get as close to the road on Loch Maree-side as I could. Landed 100m short.

I packed up and cursed my dead phone. But again it was sort of liberating to stand on the roadside and just look at the scenery and the clouds and ponder this mad thing we do.

Ten minutes later a lovely couple picked me up. We immediately discovered mutual friends, talked about ghosts and the Loch Ness Monster and flying and they took a detour to drop me in Muir of Ord, from where Becky picked me up.

Jules completed his 100km triangle. I was just elated to have smashed my PB for the second day and seen the best of the Highlands from 6400ft while flying with some great guys.