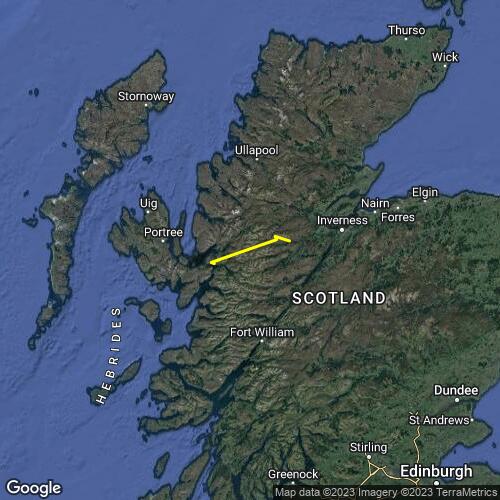 I had flown in Glen Strathfarrar briefly on Saturday. Then drove down to Glen Coe on Saturday night with the hope of 8 grand base in Glen Coe on Sunday. Przemek and his family camped with me and my family in Glen Etive, which was lovely and grew increasingly bonding as torrential rain forced us all into the porch of his tent. The rain continued well into the night. At 7am Przemek and I drove a short distance to check the forecast and concluded that the place to be was… Glen Strathfarrar! The poor girls were encouraged to vacate the tents, babies and all, asap. Amazingly we were packed up and on the road by 8am. We grabbed a Costa drive-through breakfast in Fort William and arrived in Fort Augustus just in time for the Etape road closure to be lifted at 9.15am. We collected Roland Rider along the way and Steve Hallsworth came along too.

Three hours later we climbed to launch in Strathfarrar and found strong thermic gusts coming up to launch and pretty epic looking skies above. Prezemek and I had mulled over the idea of flying to the west coast but there were a number of reasons not to. Out commitment was certainly in question. Przemek didn't have a radio, so it was going to be a case of suck it and see and observe each other to see what the other was thinking.

Timing was important on launch. I got lucky and fluked a semi-cobra launch that treated me nicely. Przemek was less fortunate and had to work hard to overcome the strong gusts. I got high straight away and tentatively bimbled along the ridge to the west - heading for the Monar dam and the end of the public road. My mind still not made up. Then I made a mistake and got low in a corrie, which allowed Przemek to leapfrog me. As I struggled out of my pickle I got hit by a tremendous thermic gust that had my vario screaming and my wing twisting and buckling above me. For the first time I could feel my heartbeat thumping in my chest. The glider performed superbly - not so much as a tuck. But when I fell out of the thermal, which was tiny, it surged forward dramatically. I hit the brakes to damp the dive and nothing happened, so I buried them to the seat and flew away - shitting myself but otherwise totally fine! It was not going to be a day for taking photographs!

I gained some more height and then spotted Przemek climbing over a small hill on the edge of the boonies underneath a cloud street that led west. I figured I'd head there and if it didn't work I could still probably glide back to the end of the tarred road. I hit the bar and found Przemek's thermal just where he had left it. And he was still heading west. Game on!

From there on it was classic cross country flying, just as I'd read about in so many books! Climb / glide / climb, repeat. With Przemek marking the way I was able to fly fast and I caught him up somewhere around Pait - the most remote house on the British mainland. From there we worked together until Attadale. Reaching the west coast was a huge achievement for me personally. I had dreamt of it for years and yet it has seemed an unattainable goal until very recently. As I flew past the aquamarine coastal waters around Plockton I realised that it hadn't been as hard it I had imagined. But that's probably an easy thing to say when conditions are perfect and base is over 6000 ft… Anyway, I lot of things clicked for me on this flight.

At Attadale I reckoned I could get to my declared goal of Kyle of Lochalsh if I took the next climb as high as I could. So while Przemek peeled off to the south of me a bit I climbed and climbed in convergence and only set off on glide once the cloud was closing around me. Then it was just a long straight 12 km glide to my turnpoint - enjoying the views of Skye and Shiel and balancing a sense of achievement with my repeated mantra of 'don't celebrate until you're on the ground! ' I had lost sight of Przemek and thought he must have landed short of the coast.

Coming down through the shear layer between the met wind and sea breeze was a bit lumpy but nothing too serious. I landed in a field on the edge of the sea just south of Kyle of Lochalsh. I rang Becky to tell her I was ok and was literally saying to her, 'I'm not sure where Przemek is', when a large shadow crossed the field in front of me. Przemek landed beside me and we hugged in jubilation.

It took us a while to catch a lift home but when it came it was superb. The fella took us all the way to Beauly, where Becky's car happened to be sitting with a hidden key. We were home in time for a beer or two and a celebratory curry!